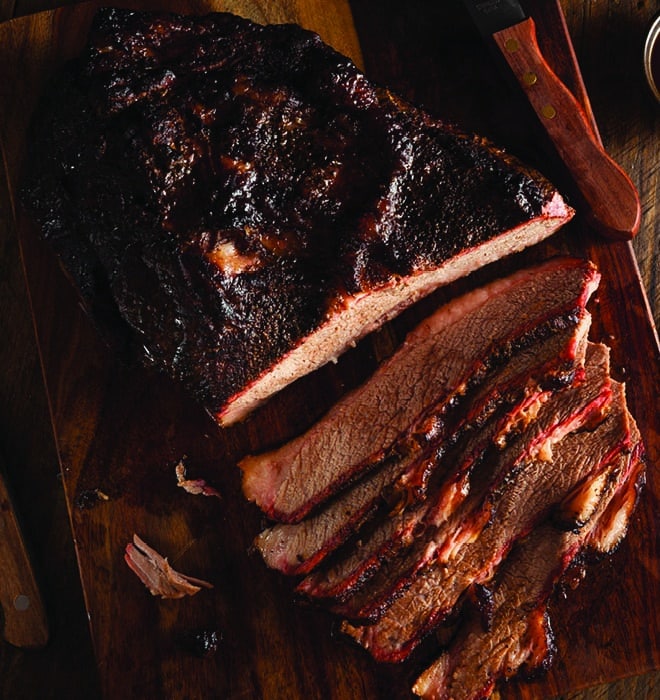 The Art of Low and Slow Barbecue*

*Barbecue, Barbeque, BBQ, or Bar-B-Que? The word barbecue comes from the Caribbean word barbacoa. The standard modern English spelling is barbecue, but there are several other accepted variations, including those above. No matter how it’s spelled, it means good eatin’!

Nothing appeals to our primal instincts like juicy, smoke-kissed meat. If you find yourself dashing to the nearest “Q” joint every time you get a craving, why not try your hand at making barbecue yourself? We used our own smoking experiences, did a little research, and interviewed certified barbecue judge Scott Miller to provide insight into making some of the best darned barbecue in Texas.

There’s no way around it—good barbecue requires time and patience. Tender smoked meat takes hours of cooking at low temperatures between 200 and 250 degrees Fahrenheit. The sweet spot is usually 225 degrees.

Keeping track of the temperature during your cook is important. Even if your smoker has a built-in thermometer, consider getting a digital thermometer with a probe and an alarm feature that sounds if the temperature falls above or below your settings. If you want to monitor temperature from a distance, get a long range wireless barbecue thermometer. Ivation makes one that lets you wander up to 300 feet away. Thermometers by iGrill are powered by Bluetooth smart technology that interfaces with its iOS and Android smartphone app. The app even graphs temperatures throughout the duration of your cook.

Check out MeatSmokingCalculator.com to help you determine the time to allow for smoking meat based on cut, type, weight, and your level of skill.Don’t be tempted to keep sneaking peeks at the food during smoking, which will decrease the temperature. As they say in the world of barbecue, “If you’re lookin’, you ain’t cookin’!”

Knowing the temperature inside your smoker is one thing—controlling it is another. Wind is usually the biggest weather problem in Texas when it comes to barbecue. It either sucks the heat out of the cooker, or forces its way into the air vents, fueling the fire. Place your smoker in a sheltered location that still offers adequate ventilation to help eliminate the wind variable.

The amount of oxygen that gets into your cooker also impacts temperature. Most smokers have vents that control incoming air, and a vent that controls the air or smoke going out. Since smoker types vary, read up on how to use your smoker vents to control the burn.

Too much oxygen means more fire and therefore increased temperatures. Too little creates a cool fire which can smolder and coat the food with bitter tasting black creosote (a dark brown oil). It could take a few tries before you get the hang of using the vents, but once you do, you will then be able to produce the cooking temperature you’re looking for.

Most smokers use charcoal to produce the heat, and get flavor and aroma from wood chips or chunks added to a bed of hot coals. Throw a couple of small pieces on and then wait and see what your smoke looks like. The most desirable smoke is “clean” and thin—almost invisible with a pale blue tint. Too much wood will produce a thick, white smoke that produces a harsh and bitter taste.

Experiment to find out what woods work best for you flavor-wise, and the amount to use. Fruit woods, including apple, cherry, and pear, are subtle enough for fish and poultry. Hickory, maple, pecan, and oak work well for pork and beef. The strongest, mesquite, is often blended with another type of wood, to keep the smoke from overpowering the food. 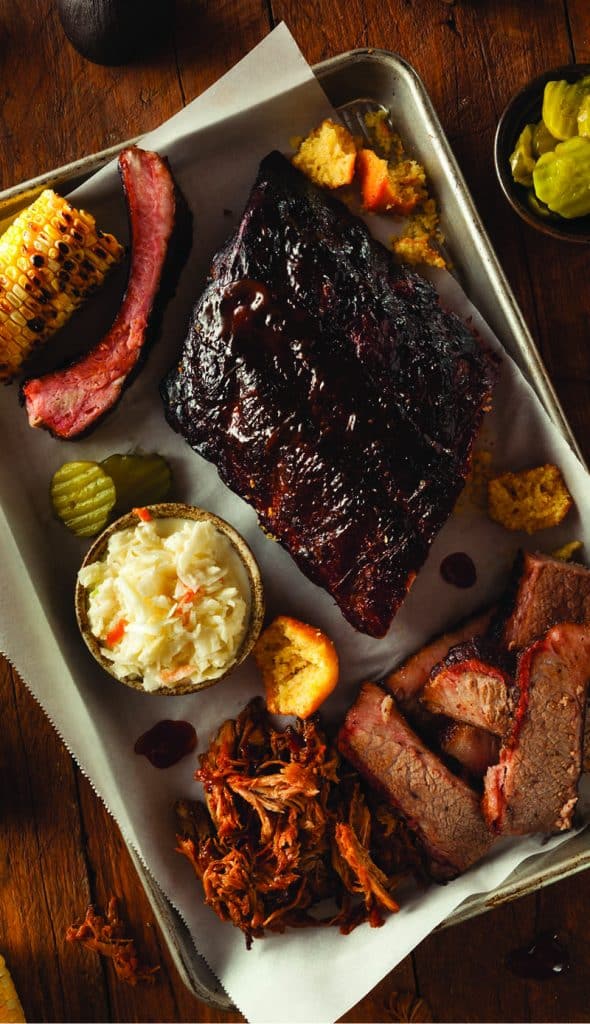 Several types of smokers are available, and there are numerous brands. Below are a few examples.

Routinely used by award-winning pit masters during competition, the Texas Crutch refers to wrapping meat in foil (with or without liquid) towards the tail end of the cook. This keeps the meat moist and can speed up cooking time. Sometimes meat is unwrapped before it finishes cooking to produce the best results.

Try more forgiving meats, such as ribs, chicken, and pork, before attempting to smoke beef brisket. You can expect some trial and error, so start out by using meat from the grocery store. Once you have perfected your method, find a source for high-quality meat, such as a local butcher. Experiment with more expensive meats, including prime beef—the highest quality, and wagyu beef (pronounced “wahg-you”), known for its intense marbling.

Know When to Hold It

After coming off the pit, meat—especially brisket—can be wrapped in foil or butcher paper and left to rest in a warmer to further soften the connective tissue. Celebrated Austin pitman Aaron Franklin rests his world-famous brisket at 140 degrees Fahrenheit for up to three hours, to make it more tender and juicy. (According to the USDA Food Safety and Inspection Service, meat must be held at or above 140° in order to be safe.)

Bark is the nice, dark, chewy crust that forms on the outside of beef and pork during a long smoke. There’s a real science behind it. If you love bark (and who doesn’t?), try these tricks.

Mix together thoroughly. Pat the meat with a paper towel, sprinkle the rub evenly one side, and rub it into the meat gently with your hand. Repeat on the other side.