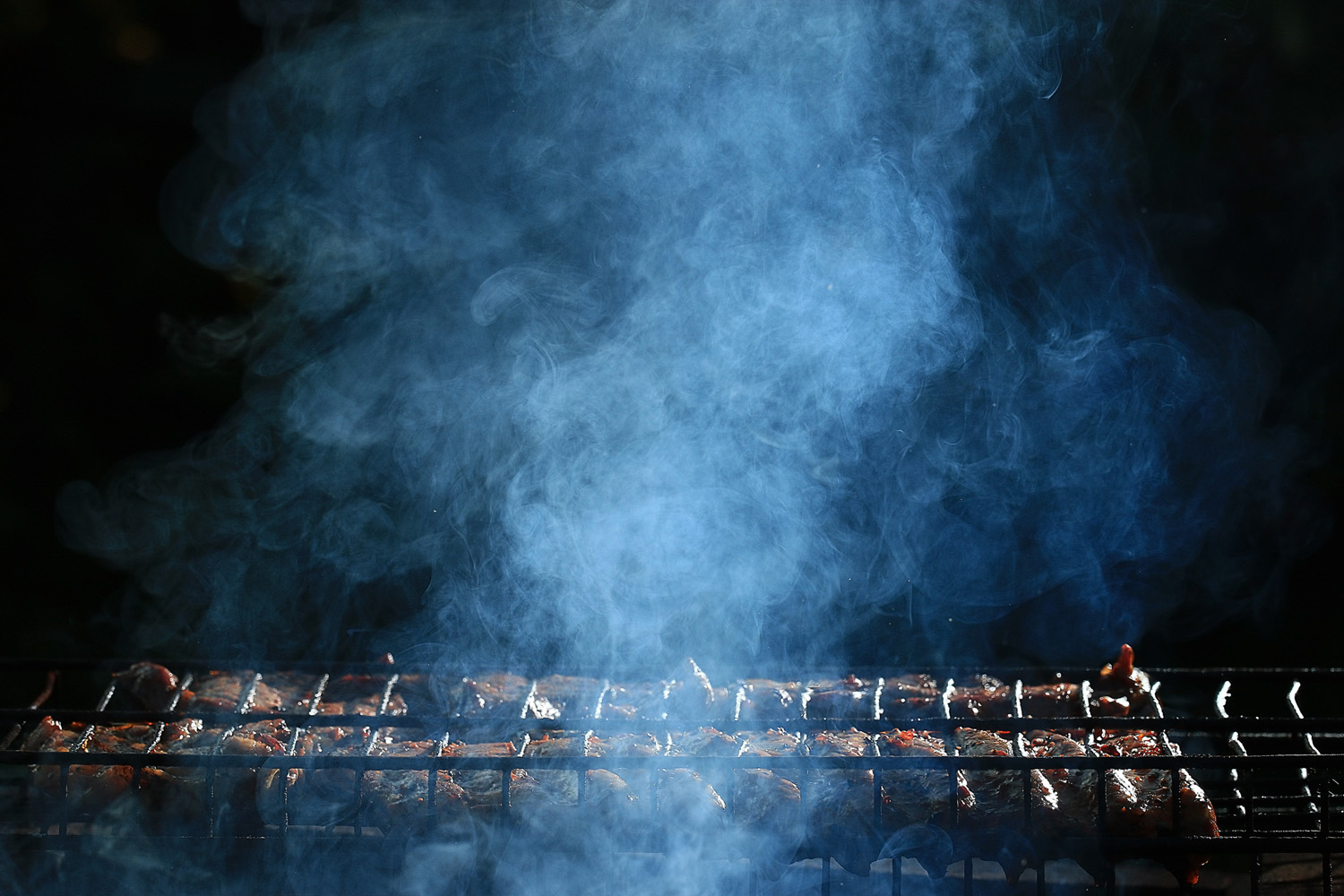 It was 1995, right on the cusp of the Texas barbecue explosion across the country. I had recently moved to the Lone Star State, and Bon Appetite had just named Clark’s Outpost in Tioga, one of its restaurants of the month. That was all the encouragement I needed to drive into North Texas’ horse country to see what all the fuss was about. My first bite at Clark’s was a defining moment where my fascination with tender, smoke-kissed Texas barbecue began, and that experience inspired a three-day barbecue crawl through the state. 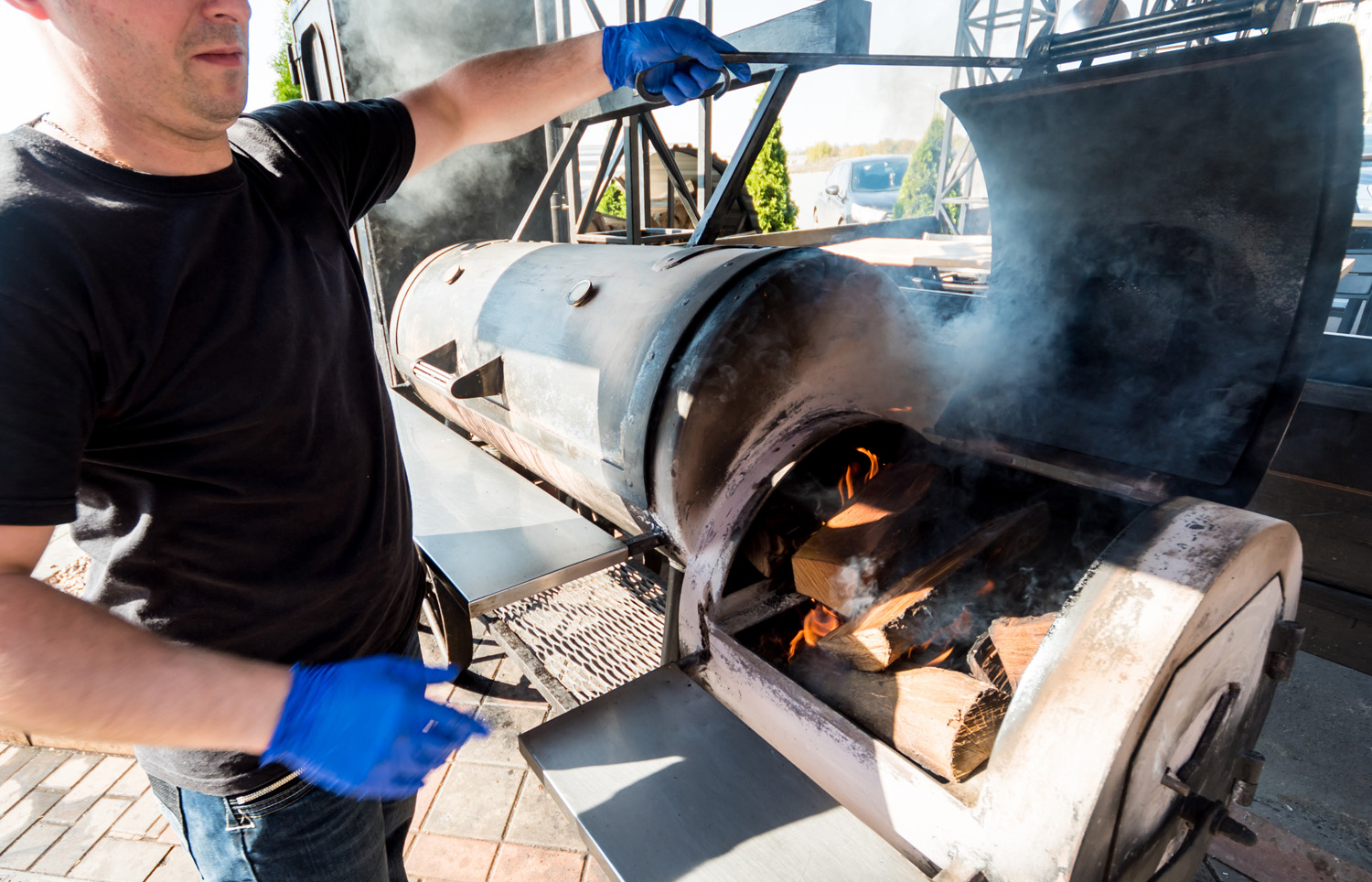 Pulling up to Clark’s in 1995, I thought, “Outpost is a good name for this place.” I had been living near The Big Apple, and Clark’s was the farthest thing from a hip SoHo restaurant as you could get. The interior was no different. Just inside the front door was a big metal box of iced down beer. I grabbed a Lonestar. My kind of place, after all! Unique, a little funky, no frills, and as down-home authentic as they come. And the barbecue? Let’s just say it set the standard for every barbecue meal I’ve eaten since.

Although Clark’s burned down in 2016, all was not lost. It was renovated and reopened by a former employee who knew the original recipes. So, when I decided to hit the road on a mini barbecue crawl from North to South Texas, my journey kicked off in Tioga. The “new” Clark’s was about the same as I remembered, right down to the vibe, juicy smoked brisket, and fried okra. Leaving with my thirst quenched and a Texas-sized “Q fix,” I returned home at sunset, the wide-open sky brushed in red, orange, blue, and lavender hues. 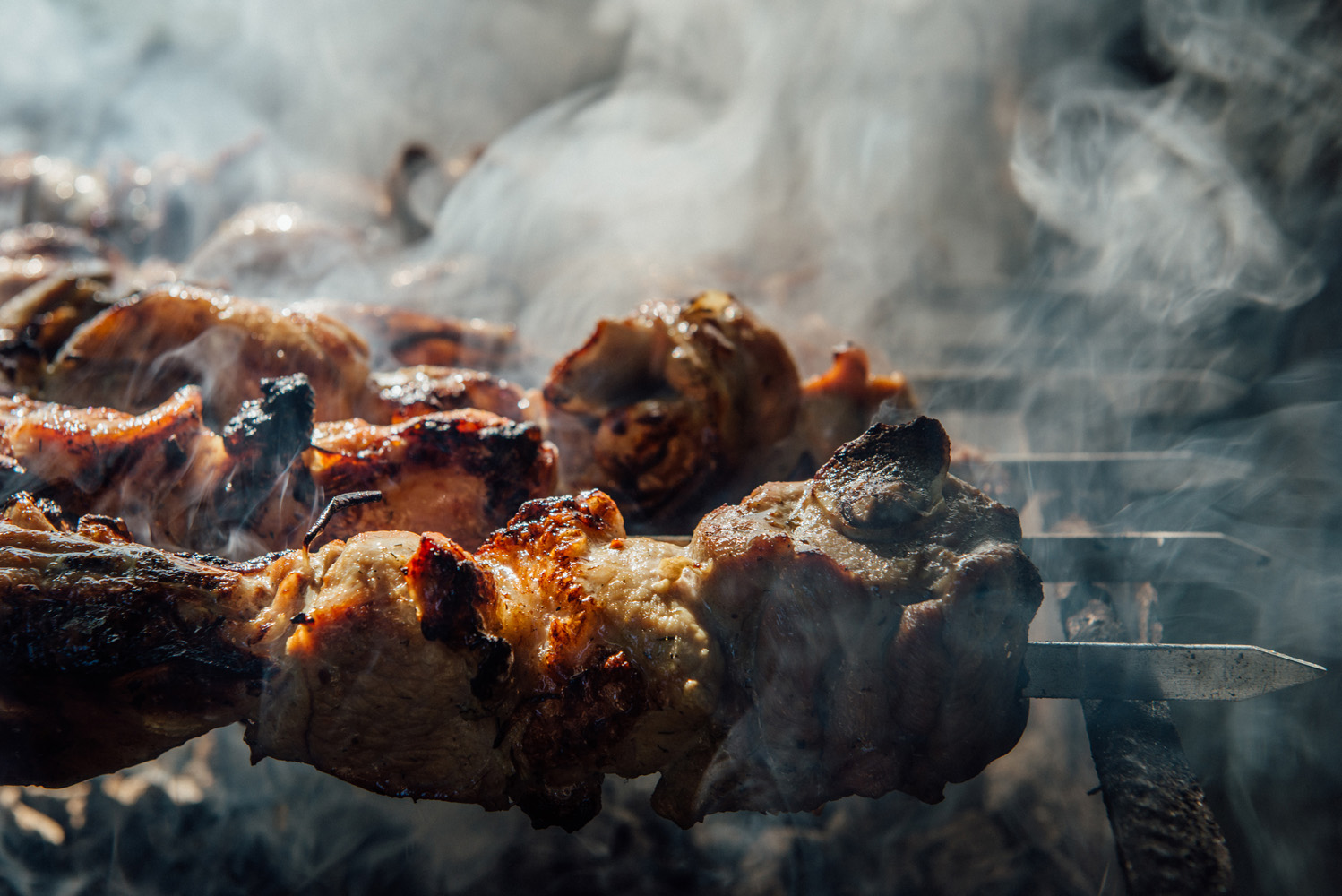 Day two involved a road trip with a doubleheader. I headed to Elgin, Texas, around three hours south of Dallas. Elgin is the home of Southside Market & BBQ, which claims to be “the oldest joint in the state.” As the story goes, William Moon began selling meat door-to-door in his wagon in the late 1800s. With no refrigeration, he smoked what he didn’t sell to preserve it. In 1886, Moon opened his first store in Elgin. Over the years, Southside has changed owners, but the mouth-watering smoked meats have remained the same.

Elgin has declared itself The Sausage Capital of Texas, so I started with a sausage slammer, akin to a jalapeño popper but covered with pan sausage, then wrapped in bacon. It was the bomb! The garden salad with smoked chicken appealed to my healthier side, but what kind of Q lover would forgo Southside’s original beef sausage for leafy greens? The juicy sausage was everything it was cracked up to be, as were the sides of slaw and beans. Luckily, my stretchy leggings obliged the indulgence. 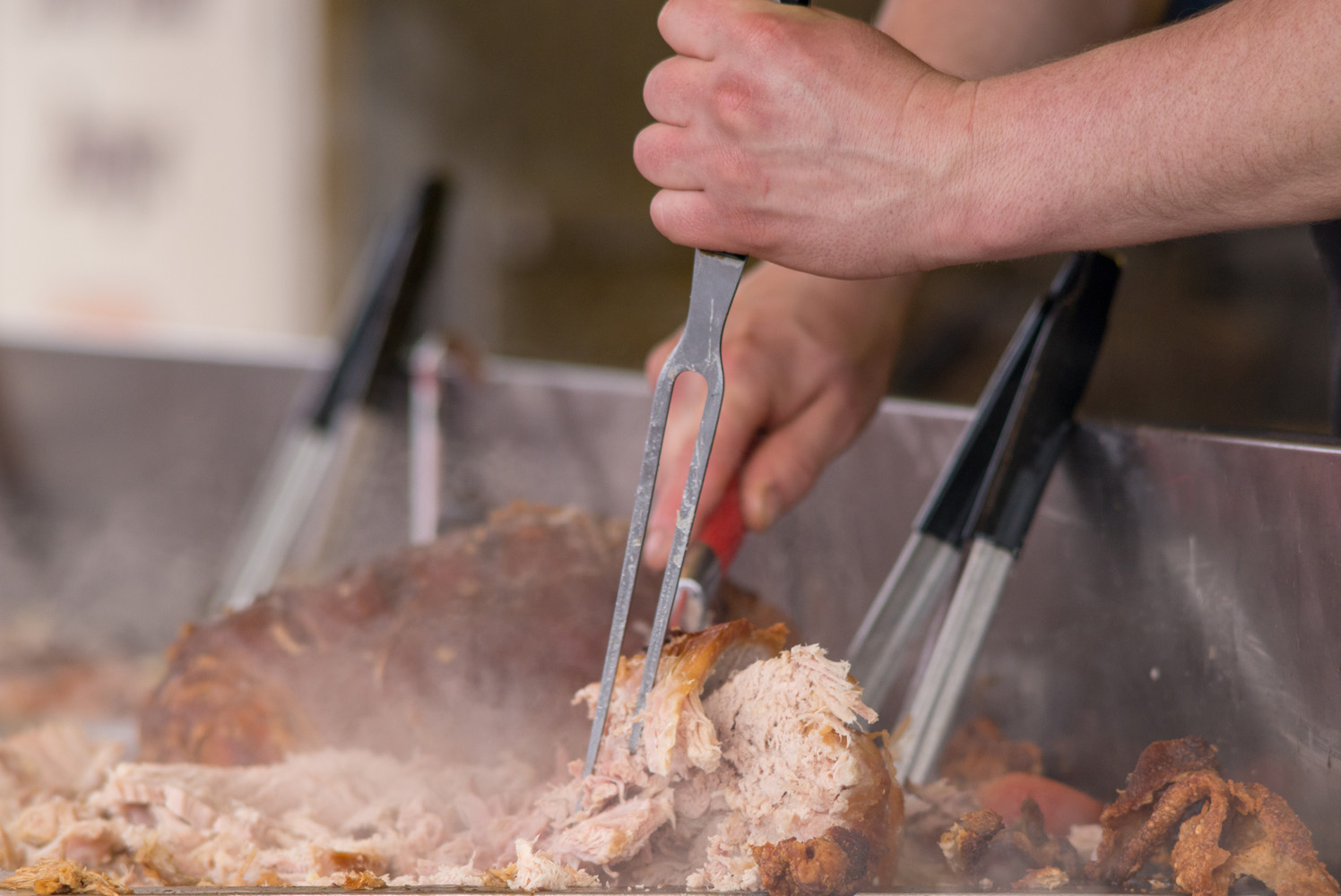 Next up, Lockhart. Texas towns love to stake a claim to fame, Lockhart included. Boasting to be the Barbecue Capital of Texas, my take was that Lockhart has some mighty big boots to fill. With three long-standing joints in town — Kreuz Market, Smitty’s Market, and Black’s Barbecue — I only had enough appetite left for one. Smitty’s, located a block away from the historic, picturesque Caldwell County Courthouse, won my improvised pick a joint coin toss.

Entering Smitty’s through an old-timey screen door, I knew it was going to be a time-warp experience. Patrons were sitting at long wooden tables in a room lit with fluorescent lights clinging to a tall ceiling, with glistening cuts of meat smoking in open fire brick pits, and served on sheets of brown butcher paper. I ordered slices of shoulder clod and “fat” brisket, skipping the sides. Shoulder clod — a volleyball-sized lean beef roast — was a Texas barbecue mainstay before the cut was upstaged by brisket. Honestly, I liked the juicy fat brisket with a perfect smoke ring best, perhaps because it’s most familiar. 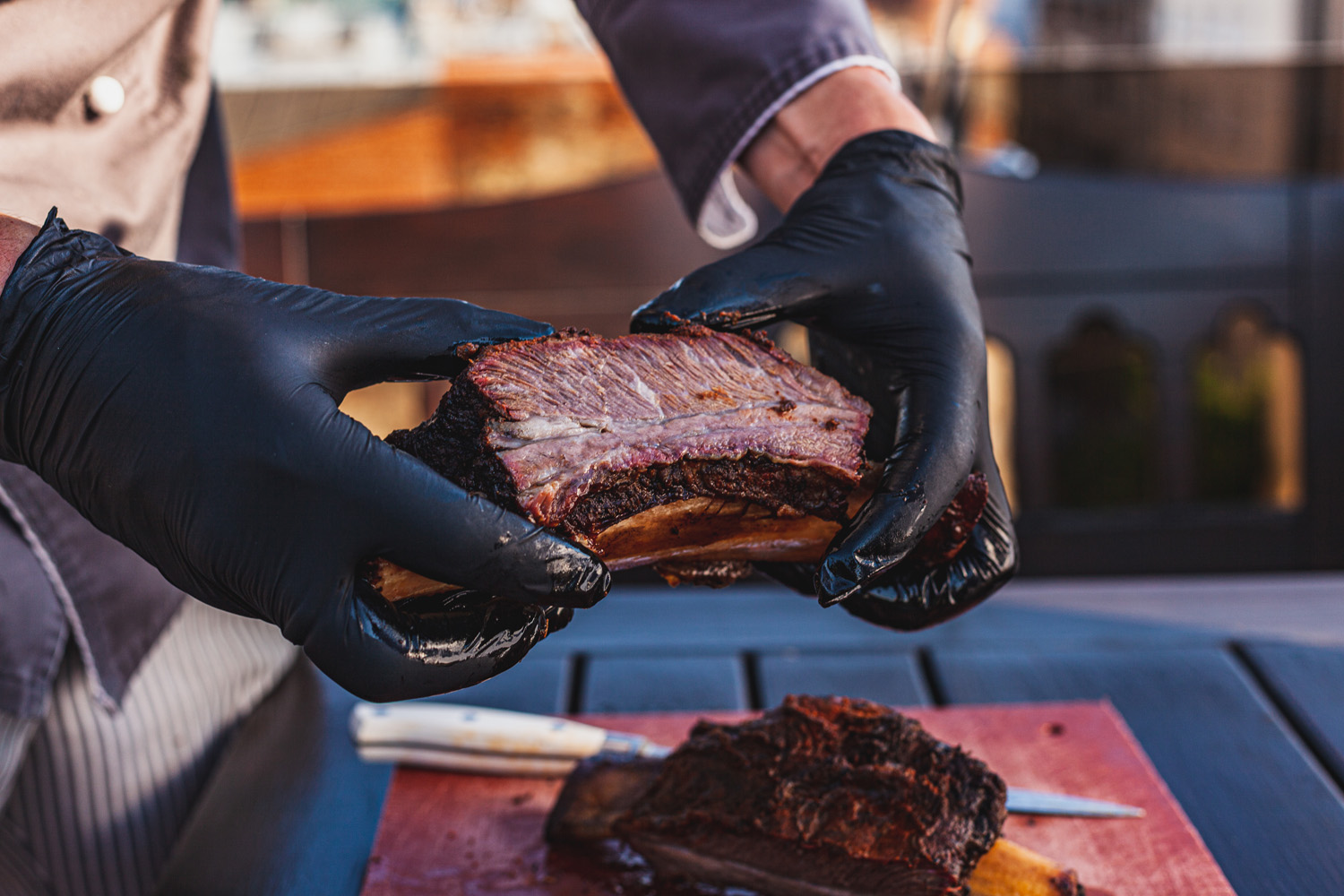 Day three brought me to Houston to a place with an odd name for a barbecue joint. I learned that although Pizzitola’s Bar-B-Cue currently has an Italian name, its roots are African American. The husband and wife team, John and Leila Davis, opened what was then Shepherd Drive BBQ in 1935. Jerry Pizzitola grew up loving the Davis’ smokey meats, so much so that he bought the restaurant when John Davis died in 1983. Since then, the restaurant has been passed to owners who keep the Davis’ methods, recipes, and tradition of excellence alive.

Known for their succulent dry-rubbed spareribs, and having read a review that described them as “meat candy,” how could I resist? And for the record, meat candy is an apt description. For the finale of my three-day, four joint barbecue crawl, I celebrated with Mama Pizzitola’s From Scratch Banana Pudding. It couldn’t have been more perfect.