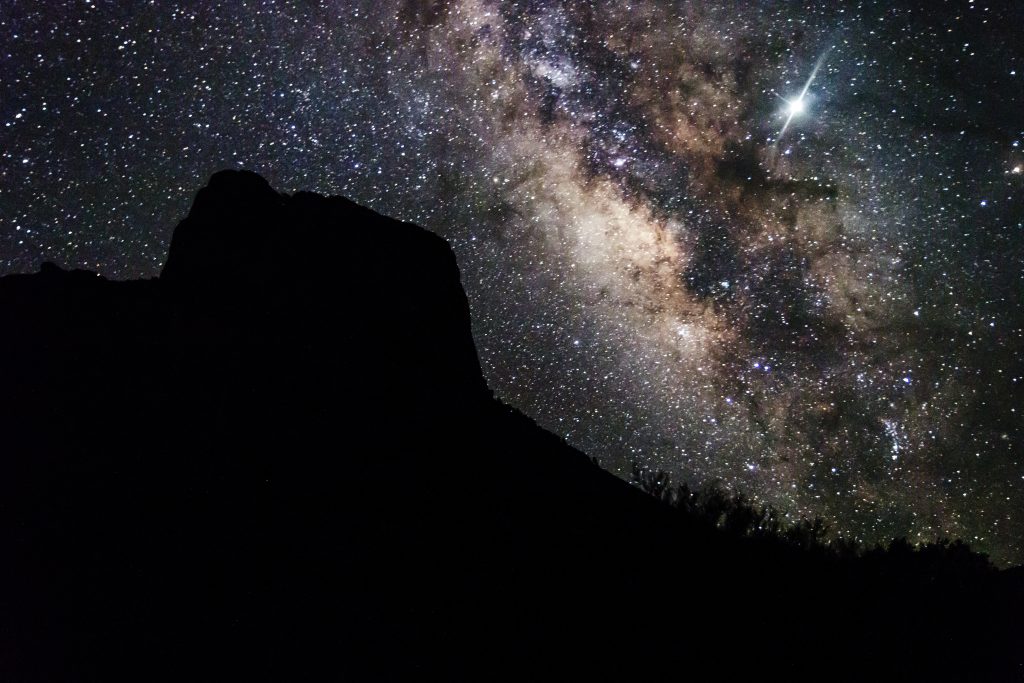 If you’re looking for tips on how to bump into Lady Gaga or Matthew McConaughey, then you are in the wrong stargazing classroom. So, please gather your things, consult your syllabus, and head across campus. This Stargazing 101 class is interested in an entirely different type of heavenly body.

Everybody, Sing and Clap

It is no secret that the stars at night are big and bright (clap, clap, clap, clap) deep in the heart of Texas. To see them at their brightest, you’ll want to head away from any city lights. You’re in luck because the heart of Texas also offers plenty of rural areas with little light interference. For the best viewing, plan your stargazing for nights when the moon is crescent or smaller.

You will need some sort of flashlight. Find one with a red filter or cover a regular flashlight with red cellophane. This will prevent the odds of you stumbling into a gopher hole while not interfering with the stars of the show.

You don’t need to rush out and purchase a telescope to begin stargazing, but if you happen to own a pair of binoculars, grab them as you go into the night.

We’re all familiar with Google Maps, but did you know you can use Google Sky Map to help you find your way around the stars? Download the app to your phone to access data from the Hubble Space Telescope, the Sloan Digital Sky Survey, and NASA’s Chandra satellite. You can point your phone toward the night sky to get a detailed map of what you are seeing.

Google doesn’t have a monopoly on stargazing apps. You can also check out the NASA app, which gives you the latest information collected from the International Space Station in real-time.

There are far too many apps to name them all, but SkyView Lite is a favorite among users who only want to track the constellations they can see.

Take the time to brush up on some constellations. You can do this with the help of an app or a good old-fashioned star chart. There are 88 recognized constellations, so you’re bound to spot one or two of them.

When it comes to identifying patterns of stars, there’s no better place to begin than the Big Dipper. It has “Big” in its name for a reason, so it’s generally pretty easy to spot. Impress your friends with your knowledge that the Big Dipper isn’t a constellation. It’s an asterism or a prominent group of stars in the Ursa Major constellation.

The Perseid meteor shower will produce its peak rate of meteors during the overnight hours of August 12 to 13 this year. The best time for local viewing in Texas should be around 10 PM.

November 19 will bring a near-total eclipse of the moon. North America is poised to see this eclipse, which will take place before dawn.