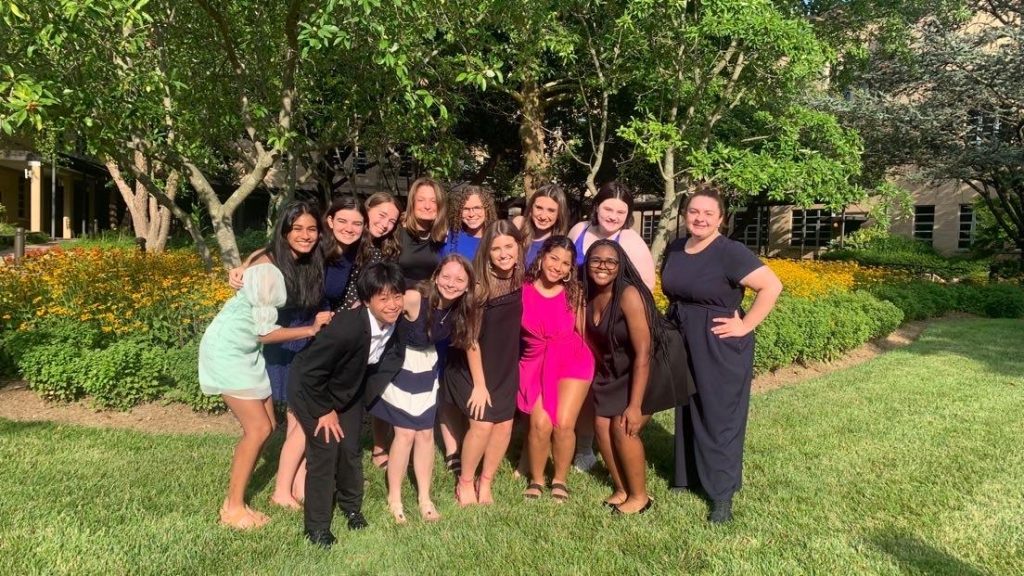 Analogous to Boys Nation, Girls Nation is an annual civic training program run by the American Legion Auxiliary. The ALA is a summer leadership and citizenship program for high school juniors, which focuses on exploring the mechanics of American government and politics. Boys and girls are usually nominated by their high school during their junior year. The programs, which began in 1937, are held in each state, usually at a college within the state.

Each state’s program varies, but program participants are generally divided into subgroups referred to as cities. The citizens of each of these cities elect mock municipal officials and representatives to the mock state legislature. Many programs have a county level as well. The participants also elect state officials, such as Governor, Lt. Governor, and other state-level officials mirroring their actual state. The legislature meets to organize, elect leaders, and pass bills similar to how their existing state legislature operates.

Some programs tend to have a more traditional education focus, providing speakers and training throughout the week and concluding with mock political functions. Other programs take a more hands-on approach by running the mock government activities all week. All programs generally follow a similar pattern but vary by state. Some states hold mock trials, the participants volunteering as lawyers, accused, and juries. Some states include a journalism component that represents the Fourth Estate in the political process.

Flower Mound High School senior Lauryn Hobbs earned a once-in-a-lifetime opportunity as one of two girls selected to represent Texas at the American Legion Auxiliary (ALA) Girls Nation. Between holding mock Senate sessions, meeting Congresspeople, and visiting national monuments, the experience proved to be truly unforgettable. Out of the 600 girls in Texas’s Girls State program, Hobbs was named one of two “senators” to advance to Girls Nation. At the 2021 Girls Nation conference, the 100 senators spent a week in Washington D.C. learning about federal government processes firsthand while developing leadership skills and building lifelong friendships.

Her proud dad, Ron Hobbs, sent the following info to explain how the students gained experience with the political process, “During mock Senate sessions, the girls wrote and debated bills, with each state’s representatives presenting unique legislation for deliberation. Further, the senators were divided into “Federalist” and “Nationalist” political parties and held a rally and conventions within each. The parties built their own platforms, which required them to establish priorities, campaign, and elect officials.” As the chairperson of the Federalist party, Ms. Hobbs led her group of senators, exercising communication and leadership skills. According to Ms. Hobbs, working within the political parties represented “By far the most time-consuming but also the most fun part of the week.”

In addition, the senators toured several national sites during their field trips, including the Washington Memorials, Arlington National Cemetery, and U.S. Capitol. Despite only spending one week together, the girls formed powerful friendships as one community bonded by an enthusiasm for government. “You feel people’s energy, and you’re so excited for what they’re going to do next,” Lauryn said. “I don’t think I’ll ever be in an environment that amazing again.”

For Lauryn, the experience at Girls Nation furthered a growing passion for government. She discovered her interest when she joined the debate team as a freshman, which introduced her to policy, international relations, and governmental processes. The exploration of diverse perspectives encouraged her to delve further into government and politics. “I always loved being able to have that ongoing conversation about what needs to be improved and how to improve it,” she said.

In the future, Lauryn plans to build upon her experiences and pursue a career related to government and politics. “My goal is to become a lawyer, possibly a public policy lawyer,” she said. Above all else, Lauryn encourages other young girls to “take the lead” and seek out their dreams.

“If you’re given an opportunity that you think you might be interested in, absolutely try it. You don’t have to know what you’re doing, you don’t have to know what’s going to happen when you get there, but just try it anyway,” she said. The Girls State and Girls Nation programs are sponsored by the American Legion Auxiliary, which supports veterans, military, and their families.