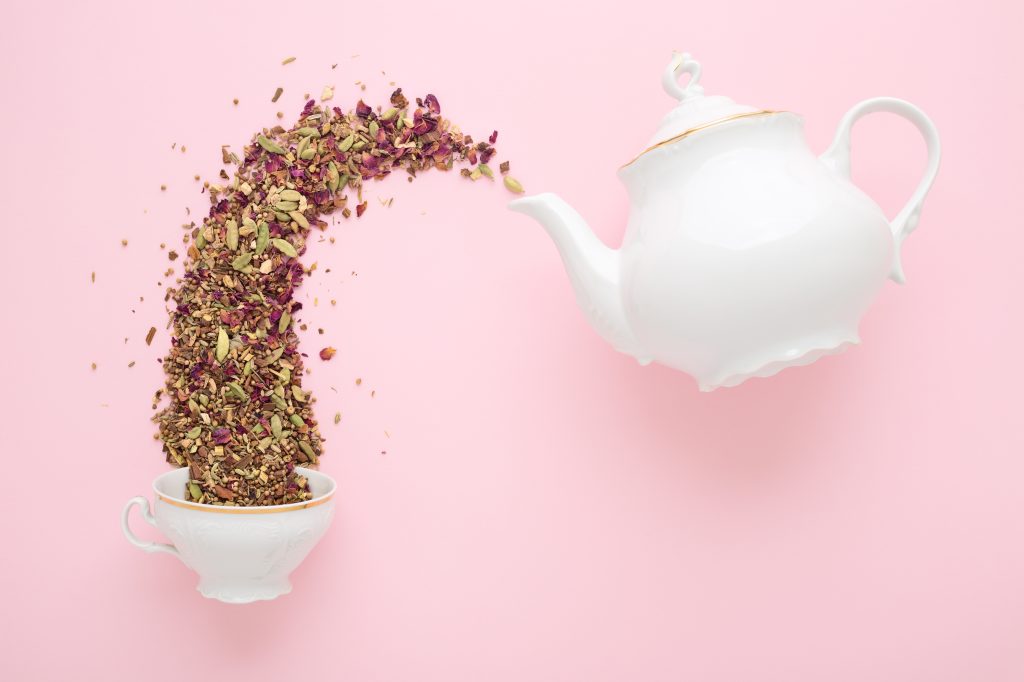 Every morning I have the same cup of coffee (black with a half-teaspoon of honey). But an hour later, I’m ready for a cup of tea that’s different every day. I live in the country, and often I gather my tea ingredients on my morning walk. Loblolly pine needles (crazy healthy), medicinal mushrooms, goldenrod, or the last of this year’s French mulberries. Once home, I might add clover or yarrow I dried last spring and always some honey from our hives. Or I could visit my herb boxes and snip some lemongrass, basil, rosemary (a little goes a long way), fennel, or mint and grind in a little ginger.

To Boil Or Not To Boil

Not all tea should be steeped in boiling water. Green tea, in fact, will scorch in boiling water because the leaves aren’t oxidized like black tea leaves are. Instead, you should steep green tea in water that’s 185°F for Chinese green tea and 158°F for Japanese green tea. (Water boils at 212°F.) If you don’t have a temperature-variable kettle, try boiling your water, then allowing it to cool with the kettle’s spout open, for about three minutes, before steeping for an additional three minutes. When prepared in this way, green tea should be smooth and refreshing, never bitter.

Black tea is the most heavily oxidized and therefore contains the most caffeine. For black tea, leaves are fully withered, rolled, and crushed (by hand or machine). As it’s allowed to oxidize, the leaves turn black before being fired in ovens to halt the oxidation process.

Green tea leaves are harvested in the morning and can be brewed that night. They’re immediately heated to stop oxidation before it begins. So, leaves retain their green color. Hence, the name “green tea.” Because they receive minor oxidation, they have a low caffeine count.

One of the most versatile teas with almost as much caffeine as black tea, oolong leaves are withered and rolled while only semi-oxidized, then fired sometimes with charcoal, for a bit more flavor. Like wine, oolong can be full or light-bodied, depending on the tea master’s preference.

White tea is harvested early in the growth cycle when the buds are still covered by thin white hairs making for a more delicate flavor profile. It’s also never rolled or crushed. Although it’s technically a type of green tea, it’s estimated to contain 15% less caffeine than traditional green tea and far less than black or oolong.

Of course, now you have to decide on loose tea or tea bags, tap or filtered water, preheated teapot or not, sugar, lemon, or milk, and resolve who’ll “be a mother.” And you won’t mind if I toss some pine needles, berries, and mushrooms in mine, will you?

While most of us associate tea with our friends across the pond in England, in his book, This is Your Mind on Plants, Journalist Michael Pollan reveals that when coffee and tea were first introduced to Europe in the 1650s, it was coffee that became all the rage. In fact, in London at that time, there was one coffee house for every hundred and fifty Londoners. But because England itself didn’t have a good climate for growing coffee beans and they had colonies in India and China where tea plants flourished, Brits soon all but abandoned coffee and became the tea culture we know and love today.