On a late morning in May, the West Texas town of Marfa is unusually quiet. The yoga studios, art galleries, and artsy bookstore the town is so famous for will be closed for the day due to recent pandemic measures. The only cars that line the main avenue that leads up to the Presidio County Courthouse are clustered under the famous neon red Hotel Paisano sign. Visitors to the region sit on the hotel’s patio at safely spaced tables around a 1930s Mediterranean fountain eating steel-cut oatmeal and discussing the day’s plan.

This part of Texas popular for its raw beauty, rugged mountainside, and high desert have long drawn visitors. During the middle of a pandemic, the wide-open spaces seem like one of the best places to spend a few days. Tourists come out here to hike through cacti-lined trails, stargaze under the darkest skies in the region, and canoe down the Rio Grande river.

Those looking to stay at a budget chain hotel can find the same roadside accommodations found along any interstate in America. Those looking to connect with the early settlers can find historic hotels along the byways that bisect the former railroad towns.

A man by the name of Henry Trost is responsible for several of the historic hotels that dot the Trans-Peco region. In the early 1900s, Henry Trost created an architecture firm with his brother in El Paso. Trost and Trost designed more than 500 buildings throughout Texas, New Mexico, and Arizona. Trost found inspiration in virtually every architectural style from Victorian to Art Deco but embraced the Spanish Colonial Revival more than any other. He was one of the first architects to design buildings adapted to the desert region, which he called “Arid America.”

Four of his early hotels not only still stand in this part of West Texas, but they have each been renovated to show off their original grandeur. 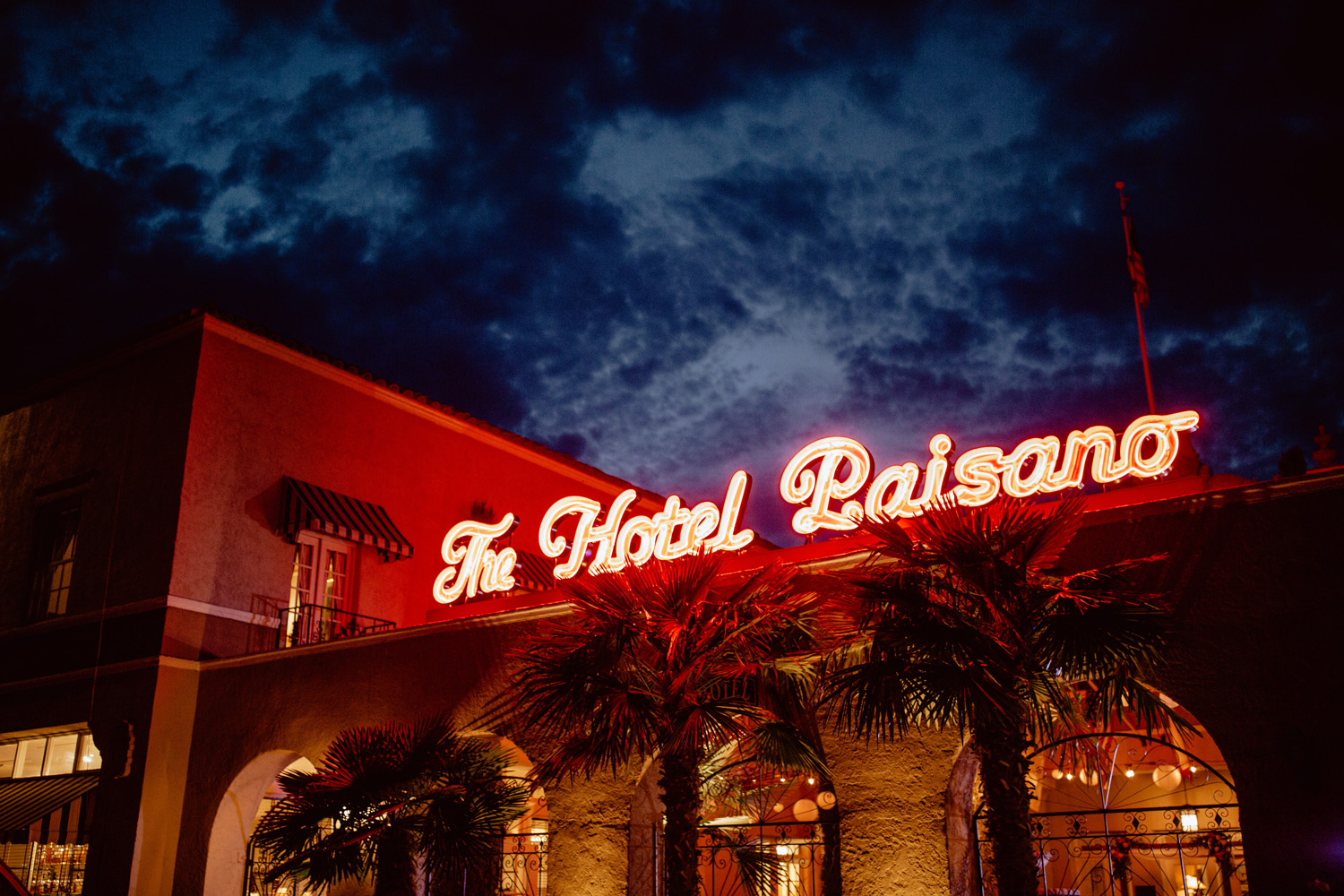 The Hotel Paisano was built in anticipation of an oil boom that never materialized. Construction broke ground days before the stock market crash of 1929. Despite these facts, the hotel thrived during its early days with a steady stream of guests, including traveling salesmen departing from the local train station, ranchers buying and selling cattle in the lobby, and tourists in favor of the high desert climate.

Known as the “most elegant hotel between El Paso and San Antonio,” Trost designed the Spanish-Baroque hotel around a Mediterranean-style fountain in its central courtyard. Much of Trost’s original detail work, such as the red-tiled roof, ironwork balconies, extensive interior tile, and wood beams, remain in place.

The hotel’s real claim to fame was born in 1955 when Warner Bros. picked it as the headquarters for the movie Giant. Elizabeth Taylor, Rock Hudson, and James Dean, along with the rest of the movie crew, made the hotel their base for the movie’s six-week shoot.

Seventy miles northwest of El Paisano sits its sister property Hotel El Capitan. The Van Horn hotel is a small version of its big sister to the south.

Trost blended his Arid American style with Mission Revival, resulting in a pink stucco front with a mission facade. Like El Paisano, the lobby details include European tiling, wrought ironwork, exposed beams, and high ceilings. Twelve of the 52 rooms have French doors that open to courtyard balconies overlooking a central fountain that is surrounded by palm and olive trees.

Both hotels opened in 1930 as part of the Gateway Hotel Chain. Encouraged by the news of the upcoming openings of Carlsbad Caverns, Guadalupe, and Big Bend National Parks, a local developer named Charles Bassett built a chain of five hotels in West Texas and New Mexico to draw tourism to destinations within 200 miles of El Paso. 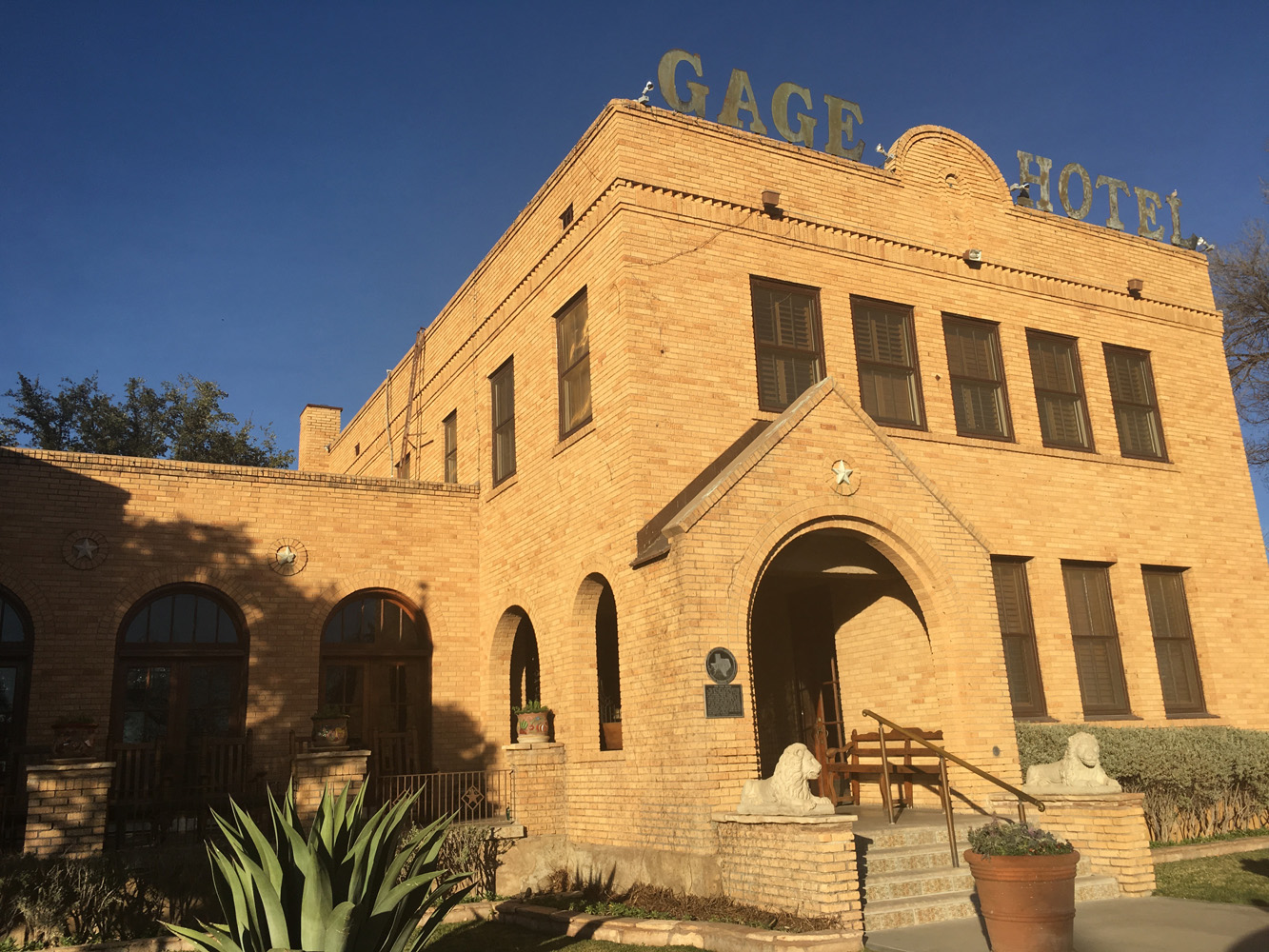 The two-story yellow-brick Mission-style hotel along Highway 90W has provided comfort for wayward travelers since 1927. Local rancher Alfred Gage commissioned Trost to design a building that would be the small railroad town of Marathon’s only hotel and act as a base for his ranching empire.

As time marched on, the population of Marathon dwindled, and so did Gage. In 1978 a Houston oilman purchased the all-but-forgotten hotel. Restoration began immediately. The new owners remodeled the 15 guest rooms in the original hotel and have added 20 pueblo-style adobe brick rooms.

In the early 20th century, an affluent rancher by the name of John Holland saw the need for a “respectable” hotel in Alpine. In 1908 he built a hotel with his namesake right across the street from the Southern Pacific Railroad depot.

After his death, his son Clay Holland invested $250,000, hiring Trost to remodel the hotel. Trost designed the exterior to match existing adjacent structures and the interior with Spanish Revival elements such as arches, embossed wood beams, and tile floors.

Upon the grand reopening in March 1928, the Alpine Avalanche described the remodel as, “No expense has been spared to make the hotel the very latest and most modern that could be built and it is believed that this modern hostelry will be the means of attracting many people of wealth to the area for vacation in the wonderful climate.”

photos courtesy of: The Hotel Paisano and Jennifer Simonson 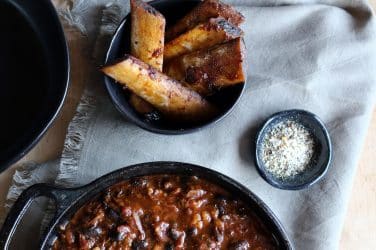 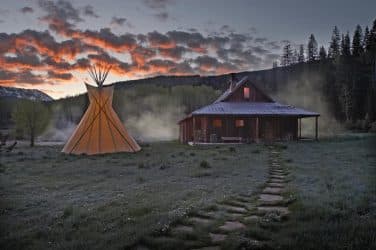 Digital detox getaways near and far    By Annette Brooks After tracking what I ...