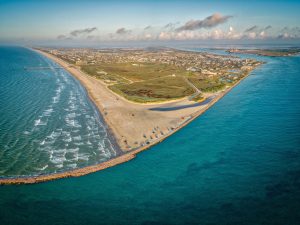 Consistently ranked among the best beaches in Texas, the 39-mile stretch between San Jose Island, Port Aransas, and Mustang Island are perfect getaways from the hustle-bustle of the city, each offering its unique reasons to visit.

Whether you’re set on heart-pumping adventure, or slow, meditative relaxation, these barrier islands outside Corpus Christi have the goods. If you can haul it, you can rent sturdy kayaks and boards of every kind — surf, paddle, boogie, skim, and body. Catch the best waves Port A offers in December or ride a jet ski into the sunset during the summertime and fall when the water is at least 77 degrees.

As for fishing, it’s a big deal here. Port A was called Tarpon, Texas, until 1910, according to Port Aransas Preservation and Historical Association Executive Director Cliff Strain. Back then, anglers wore their best clothes in case they caught a tarpon and had a photo taken with the violent, fighting trophy fish, he said. Today food species like redfish and red snapper keep fishing competitions alive and charter boats booked for deep-sea excursions, while casual fishing off the bays and rocky jetties is year-round. In the winter, quiet but friendly couples from around the world pull in catfish on the Port Aransas Jetty. Rent fishing gear from the Port A pier shop, Keeper’s, to cast off there, or rent from Island Tackle to roam further.

Throw a towel down to bask in the sunshine on these coasts, but find seclusion on San Jose Island, a hidden gem accessible only by boat. Littered with millions of tiny shells, the island is a treasure chest of colorful souvenirs from the ocean floor. Dogs are allowed, but cars are prohibited, so arrive via Jetty Boat from Fisherman’s Wharf on Port Aransas but be sure to make the last boat back at 6 PM. Camping is permitted, but you’ll find no shade, showers, bathrooms, water hookups, or electricity, so bring what you need. This sandy area is public, but only on the Gulf side, so stay on the ocean side of the dunes.

Around 400 species of migrating birds pass through these islands and are visible, especially during cold fronts, so look out for scarlet tanagers, painted buntings, roseate spoonbills, and many more.

Dolphin-spotting is also common, with dolphin tours at least three locations – The Scarlet Lady, Dolphin Watch Nature Tours, and Captain Kirk’s – to ferry you out to catch the playful mammals as they breach the waterline. But they’re easy to see from the shore, too, especially around small bays and jetties.

Named for wild horses that once roamed the area, Mustang Island’s 18 miles of pristine shoreline include Port Aransas and Mustang Island State Park, but don’t get the park confused with the island itself. Families and friends cluster around to cookout under pop-up tents outside the state park, where you can swim and camp for free. You’ll find camping sites with grills, shade, water, electric hookups, primitive sites, and great bird-watching areas in the park, making it a great deal for family vacations.

The tiny, whitewashed exterior of Chapel on the Dunes is a striking must-see attraction set on a hill in Port Aransas. Built in the late 1930s, interior dream-like murals are open to the public with a free tour scheduled through the Port Aransas Museum. Grounds are lovingly cared for, but you can help them by staying off the vegetation to keep surrounding dunes as stunning as you find them. Stop into the Port Aransas Museum blocks away and enjoy the short, docent-led tours and rotating exhibits on area history.

Port Aransas is the only town on this sleepy island stretch, and luckily, it has fantastic eats. Local favorites Irie’s Island Food and Playa Grille earn their reputation for excellent grub. Finn’s Grill and Icehouse will even cook your fresh catch for you. Make reservations since fine establishments like Roosevelt’s at Tarpon Inn close early in the off-season but might be busy at other times.

Caffeinate at Coffee Waves with espresso over a subtly sweet gelato, or head to Barefoot Beans for cappuccinos that make you go back twice. Revive sugary childhood memories with a paper bag full of treats at Winton’s Island Candy. Grab a sample of the eye-popping pecan, chocolate, and gooey caramel melted into the most beautiful cake formations you’ve ever had seen.

You can’t book a lousy location when you’re ready to wash off the sticky sunscreen and hit a soft bed in Port Aransas. Small but luxurious and modern, Balinese Suites and Spa is a short walk or golf cart ride to the beach if you don’t wake up and see it from the balcony of beachside vacation rentals like The Mayan Princess.

Golf carts are a fun, low-impact way to get around the island. Rent a cart from a local spot by the day or the hour.

This unfussy stretch of Texas coastline just outside Corpus Christi comes alive with visitors during Spring Break, while the rest of the year finds it a restful place to enjoy the best that Texas coasts have to offer.