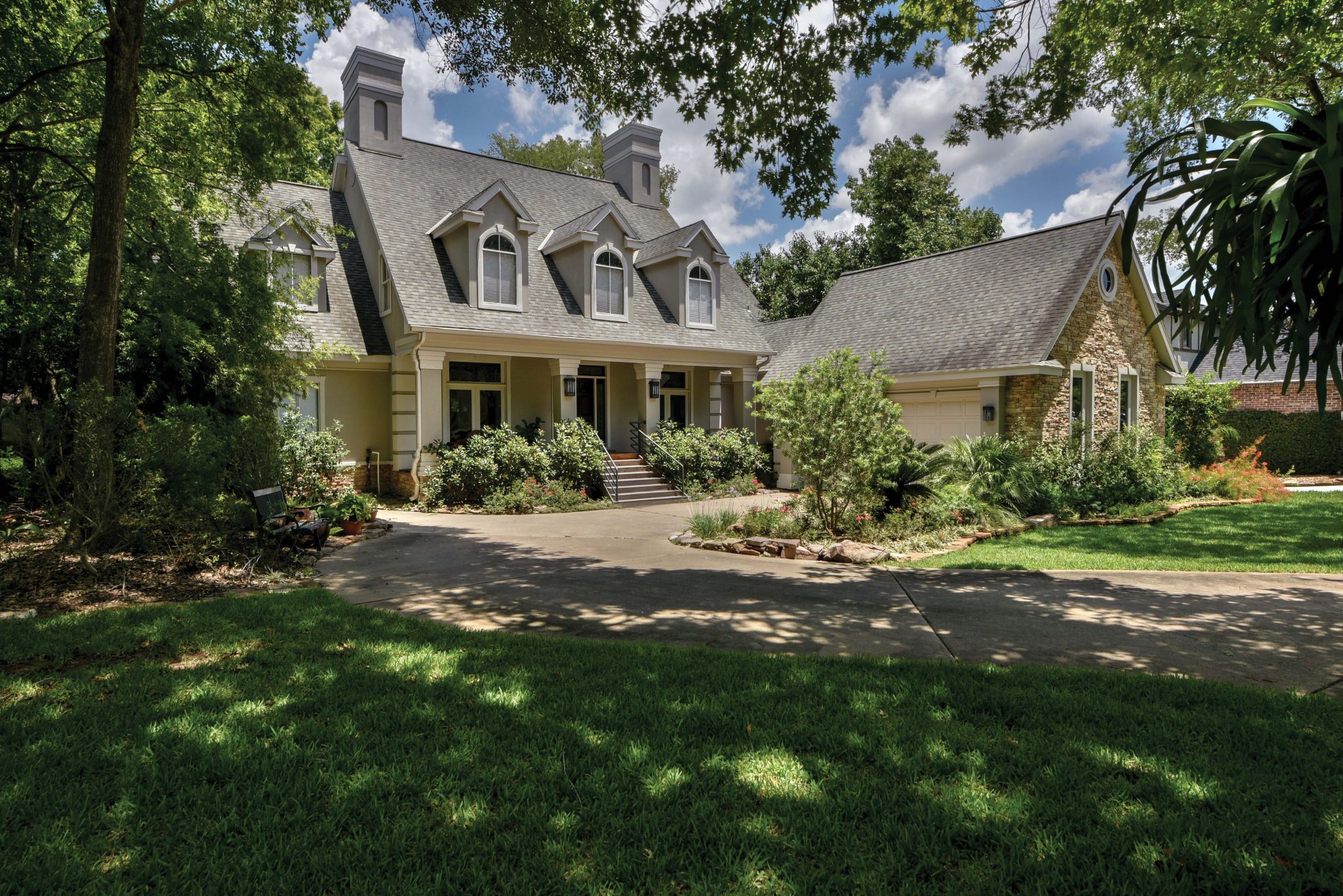 David Sharp always said he’d live in a refrigerator box under a freeway before he’d build a house. He was only half joking, too. Then came Hurricane Harvey, and David and his wife had 12 feet of water in their home. They moved into a rental house and discovered they really liked the new neighborhood. “We liked the country club, got along with our neighbors, and loved how centrally located it was,” he said.

Across the street was a lot owned by Jack Knowlton of Envision Design Build, and David decided it was time to do the one thing he’d always said he wouldn’t — build a home. He was disappointed when he met Jack and realized how much he liked him. “I always said I’d end up hating any contractor I worked with,” David said. “But he seemed like such a nice guy.”

He started with a blank sheet of paper. “I told him basically what we wanted,” David said. “With his help and advice, we tweaked and tweaked and tweaked the design. We started building and made lots of changes along the way. I can’t tell you how many times we changed our minds about a detail. Jack was unruffled, each time.”

One thing that struck David right away was that Jack lived in the neighborhood, too. “You have to be a good builder to live where you build,” he said. “We rented a place two doors down and I watched our home go up. The subcontractors he hired were all topnotch, and it was easy to see the respect they had for Jack, his project manager, Garrett Shaw, and the work they do together.”

“We’ve been in our home for two years now and I can tell you there’s not a wall out of plumb,” David said. “There’s no other house like it in Houston. They built me custom shelves and gun racks and covered the office floor with longhorn steer hide. It’s 100-percent ADA compliant, so we can age in place. They installed an elevator and whole-house generator and even built us safe rooms. I can’t believe what a great experience it was, and the contractor I assumed I’d despise I now consider a friend.”

Suzi Colbert ran across Jack and Garrett when they were remodeling a home in her neighborhood. “I was really impressed with their work,” she said. “I liked the pride Jack took in the job he was doing and his attention to detail.” She was so impressed, in fact, that when she decided to build, Jack was the only person she called.

“The entire experience has been positive,” Suzi said. “Jack was great to work with and very patient. He made a lot of recommendations and suggestions and knew all the right questions to ask to help me consider what would work best for me. He really took the time to talk with me. We bounced ideas back and forth and he was so patient. I’ve had previous experience with builders but never one who took so much time to help me make decisions.”

Suzi found Garrett responsive to every little question or concern she had. “He’s kind and truly a pleasure to work with,” she said. “I’m a detail-oriented person. So, I asked questions about any and everything they did, and he was always happy to walk me through it. I’d certainly recommend Envision Design Build to anyone looking for a truly custom home that’s also extremely well-built.”

Envision is a bit of a second career for Jack Knowlton. Or maybe it’s just a course correction. He spent over 18 years happily working as an architectural designer. Then, as he designed and built his own home, he came to realize how much better it was for the person who’d conceived the design to be the one to put it into action.

“As a design build team, by the time we begin to build a home, we’re already intimately familiar with the plans,” Jack said. “We’re already thinking about how we’re going to build it — and why. We already have the homeowner picking out windows and door styles, etc. We’re all about ‘value engineering.’ Because we have so many working relationships with vendors and tradespeople, we can cater to a budget (within reason). We have a realistic idea what it will cost to implement our design ideas and can build to a timeline and budget, so there’s no sticker shock at the end.”

“Our specialty has been taking older, neglected houses and turning them into beautiful homes again,” Garrett said. “Memorial has so many great old places, but they really need work. We’re essentially building the family a new home but with the character and history of the old one. We can take eight-foot ceilings and raise them to 10 feet and knock out walls to create more open living spaces. We modernize the kitchen and baths and make the home more energy-efficient with insulation, an upgraded HVAC system, tankless water heaters, and energy-efficient windows and doors. As we start taking down walls, we can have conversations with the homeowner about how to save them money and how to relocate things to make the home more functional. The entire process of designing and building is an open dialogue with the homeowner, and it’s all done in-house, from concept to design to completion.”

As Jack and Garrett make the home functional, a team of seasoned interior designers — or your own designer, if you prefer — can work with you to make it unforgettable.

More and more homeowners are discovering that working with a design build team not only gives them one point of contact so less is lost in translation, but their projects are coming in on time and on budget because the same person with the vision for their custom home is the one seeing that vision through to reality. Visit EnvisionDesignBuild.com for a gallery of exciting, local projects.