Keep your kitchen interesting by choosing some luxurious culinary standouts.

We’ve all been there. You’ve decided to commemorate a special occasion by cooking something a little out of the ordinary, and now you’re faced with the prospect of dropping a bill or two on some gourmet eats that you’re not entirely sure how to cook or use.

We’re here to help! In keeping with this issue’s theme, we’ve decided to spotlight a few luxurious ingredients that you can bring home from the market, dish out a few tips on how to pick the best ones, and suggest a few ways to use them in your very own meals.

Read on—your mouth (and stomach) will thank you. 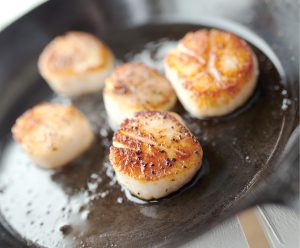 How to pick ‘em: There are generally two ways you’ll see sea scallops presented at your local seafood counter: wet pack and dry pack. Wet pack means that the scallops have been soaked in a sort of sodium preservative, which isn’t all bad in theory, but the spongy little mollusks can absorb up to half of their own weight of this solution, meaning you’re basically paying for salt water. Wet pack scallops will look kind of slimy, goopy, and really white. If you can swing it, look specifically for dry pack scallops, which are a more muted ivory or beige color, and don’t have extra water in them, meaning they won’t cook down. In short, get the biggest dry pack scallops you can afford—the best ones can demand anywhere between $20 and $30 a pound. Good scallops will have a bit of a sweet ocean smell.

How to cook ‘em: Scallops are very sensitive to high heat, and overcooking them is absolutely the cardinal sin of scallop acts. Grab your thickest uncoated pan and get it screaming hot, with a really thin coating of oil (avoid olive oil, due to its low smoke point). Consider turning on the exhaust fan or open a window, it could get smoky. Some cooks recommend removing the smaller muscle to the side of the scallop, but it’s not strictly necessary and is totally edible. Pat the scallops as dry as possible, then sear them for a minute or two on each side, absolutely not turning them over until a nice crust has developed. Once they’re crusty on both sides, hit them with a little salt and get them out, then feel free to turn down the heat and plunk in a tablespoon of butter with some white wine to make a nice pan sauce. Pair them with some mashed potatoes and steamed asparagus, top them with the pan sauce, and let the accolades roll in.

How to use something else: If you’re not really feeling like giant, steak-like sea scallops for your main course, but still want that taste and texture, consider the unassuming bay scallop, which is often encountered in stir-fry and pasta dishes. They’re smaller, sweeter, and much cheaper—you can even go frozen on these since they won’t be the centerpieces of
your dish.

Color Me Surprised – Some scallops have a slight orange or pink tint to them! Many say there’s no taste or texture difference, but some passionate foodies and chefs insist the flavor is slightly more delicate. They’re somewhat uncommon, but the price is the same—so if you see one, give it a shot! 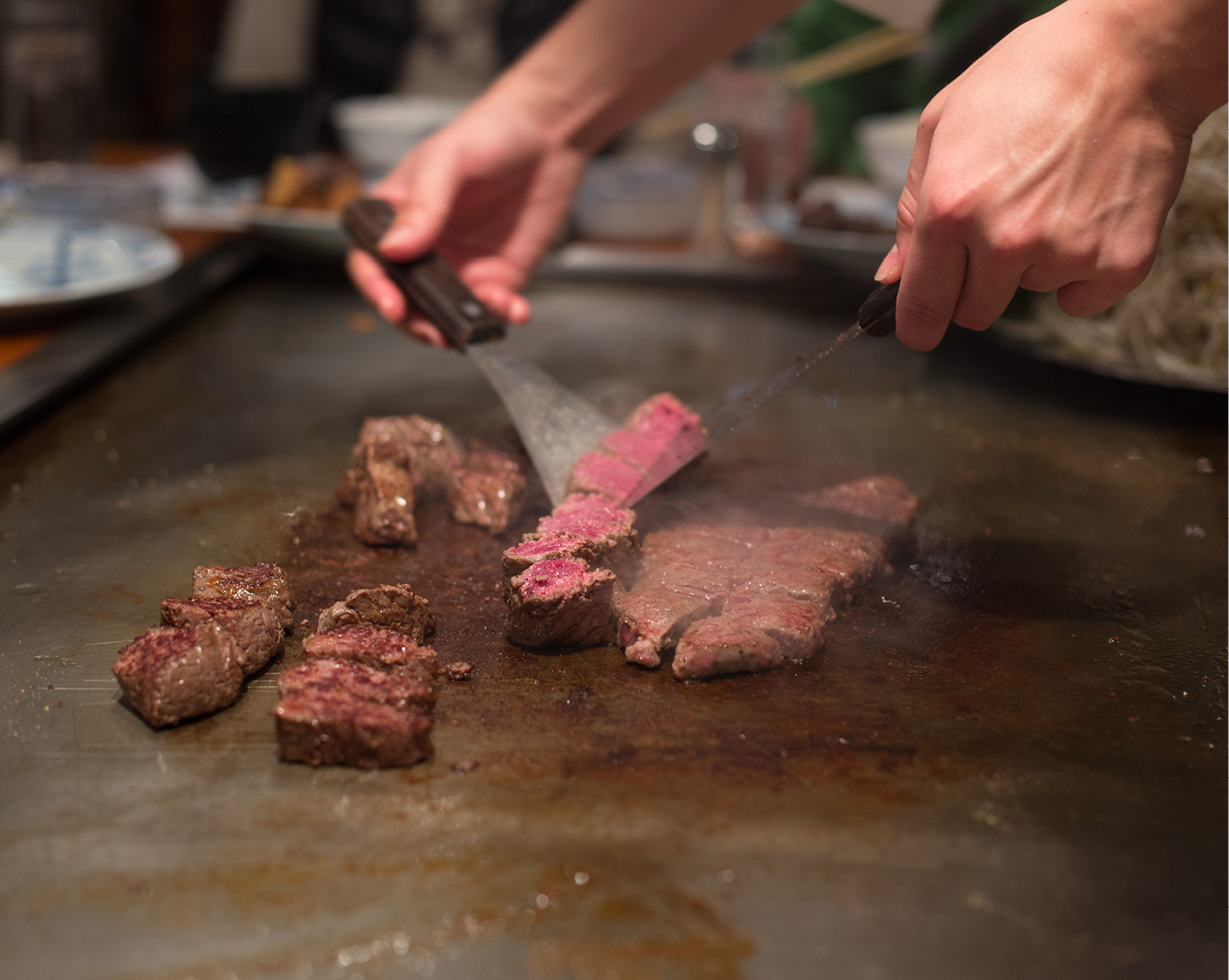 How to pick it: Kobe beef is pretty special in the way that it’s raised—the legend goes that the cows are massaged with sake and fed beer in summer. At any rate, the end result of the unique grain-based diet and special care is a beef that is heavily marbled, incredibly rich, and melt-in-your-mouth tender. It’s so rich, in fact, that some chefs have equated it with the feeling of eating butter. It’s for this reason that it’s often sold in very small portions. Look for meat that has a deep red color, with veiny, consistent fat marbling throughout. Unlike lean, traditional cuts, the fat here is the most important element, and the meat should not look too fibrous or dark in color.

How to cook it: There aren’t many specific considerations to be aware of when it comes to Kobe beef as opposed to a normal steak, just that you don’t want to cook it for too long. The real treasure of the fatty marbling is the rich, decadent flavor, which means you should never go longer than rare or medium rare at most. Try a medium-high sear for a couple minutes on each side, then salt and pepper. If you want to be sure of its internal texture without cutting it open, try the finger test: make an “a-ok” with your index finger and thumb, then press on the thumb muscle with your other hand. This sort of resistance from your muscle will approximate how medium-rare meat should feel to the touch. You can effortlessly serve your steak with a pilaf and some steamed carrots, for example, with a glass of red wine for an elegant dinner in.

How to use something else: The secret about Kobe beef in the U.S. is that in all likelihood, the “Kobe beef” you’re buying isn’t actually Kobe beef. Much like Champagne, “Kobe beef” is a term that denotes a product that comes from a specific area, and in the case of Kobe beef, outside of a few special restaurants, the meat isn’t exported. Still, you’ll find plenty of “American-style Kobe beef” stateside, that, aside from its lack of authentic lineage and strict classification requirements, can approximate the taste. It’s often called something like “wagyu” or “Japanese-style beef.” The upside is that taking home an American wagyu steak is far less expensive than actually going to Kobe and dropping a cool $120 on a relatively small cut. 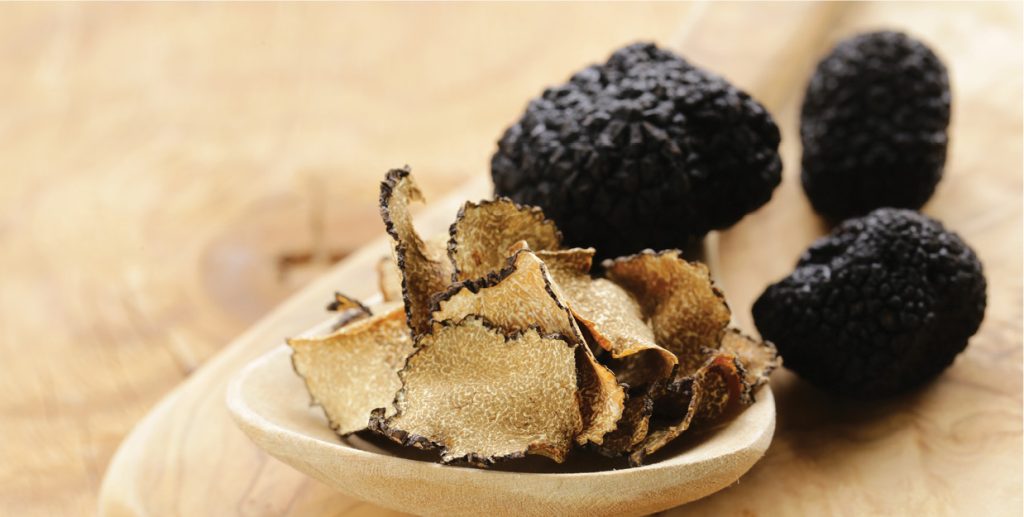 How to pick ‘em: Let’s get this out of the way upfront—truffles are extremely expensive, and by all accounts an acquired taste, a tricky combo! There are essentially two main varieties, the black truffle and the white truffle. The black one is the one you’ll see most often, as it has a longer shelf life, a more persistent aroma, and is less expensive, with the white truffle being much more expensive (and harder to find) due to its temporary freshness period and intense flavor. When selecting a black truffle, find one that feels heavy, or dense, for its size. It should have an immediately detectable aroma when you smell it, be free of any surface holes or pits, and should be firm, not soft. Stick to retailers you trust here, as there are several ways that truffles can be doctored up to seem fresher than they are.

How to use ‘em: The key to truffles is really to maximize the surface area that makes it into your mouth. One of the most popular methods of getting truffles into a meal is shaving off razor-thin slices or using a small spice grater to deposit the good stuff atop fresh pasta with Parmesan and butter, to accompany scallops or other delicate seafood, to finish off dishes such as risotto, or to accentuate a good frittata or omelet. The truffle needs to be the star of the show, so stick to simple dishes with only two or three ingredients. Heating black truffle shavings helps to really unlock the aroma, so you may want to warm the shavings slightly in a little butter, depending on how you plan to use them.

How to use something else: If you’ve entered a restaurant in the last couple years, you’ve probably started to notice more and more dishes that feature truffle oil—truffle fries, truffle mashed potatoes, truffle mac and cheese—as an affordable way to catch a taste of that truffley goodness. Though truffle oil features an aromatic flavoring that approximates one of the aromatic compounds in truffles when combined with olive oil, truffle oil does not, in fact, contain any actual truffles. There’s been a bit of hubbub about its use among many professional chefs who fear it detracts from the perception of real truffles, but don’t let that necessarily stop you. It can be a very affordable way to give a little hint of something special to foods you wouldn’t otherwise want to expend real truffles on, such as the aforementioned starchy comfort grub.

Sticker Shock – Black truffles can go for upwards of $1,000 a pound, with white ones going over $3,000 and into even higher realms. The good news is that most truffles aren’t that large by themselves, so you might be able to nab a one-ouncer for between $60 and $100.

We chose to focus on a few things you might realistically expect to use in your kitchen in this article, but there’s no end to the intriguing delicacies that can be found around this great planet. A few examples:

One of the most rare and prized mushrooms in the world, this unassuming fungus grows in certain Japanese pine forests and is a quintessential “fall food” in rice porridges and simmered meat dishes throughout the country. A package of three small mushrooms can easily sell for upwards of ¥3,000 (about $25). Try a fresh, earthy shiitake mushroom to lightly approximate the flavor.

You might be familiar with this coffee, one of the most expensive in the world, more for the manner it’s acquired than the way in which it’s prepared. Coffee cherries (the actual fruit of the coffee tree, each one containing a coffee bean) are selected and eaten by a particular animal called the Asian palm civet, who then digests the fruit surrounding the coffee bean, and… deposits the bean. These deposited beans are then gathered up and roasted. The story goes that certain peptides and enzymes in the civet’s digestive system help to reduce the bitter aftertaste of the coffee made from the beans. All this trouble means the coffee beans often sell for between $100 and $600 a pound. Many insist it is their number one coffee—hopefully it doesn’t fall to second place.

A Chinese dish traditionally served at banquets, weddings, and other special events, shark fin soup historically represented power, prestige, and luxury, with an average bowl drawing upwards of $100. The shark fin itself imparts no real flavor to the dish, but gives the soup a smooth and supple texture. Though the dish can still be found even in the United States, in the last two or three years the dish has fallen markedly out of favor in the U.S. and abroad due to ethical concerns. Safe “mock” alternatives exist that replicate the smooth texture using ingredients such as gelatin.

The Yubari melon, widely reported on internationally, is one of the sweetest—and most expensive—melons in the world. A special hybrid cantaloupe, the Yubari melon is widely used for gift-giving purposes in Japan. One melon in perfect cosmetic shape, excellently round and at the peak of freshness, can sell for anywhere between $80 and $160, though publicity-stunt auctions at the start of harvest have drawn up to $20,000 for a pair in the past. Grown in special greenhouses and carefully harvested, trimmed, and packed in foam by hand, the melons are often shipped only by air so that they can be consumed at their best.