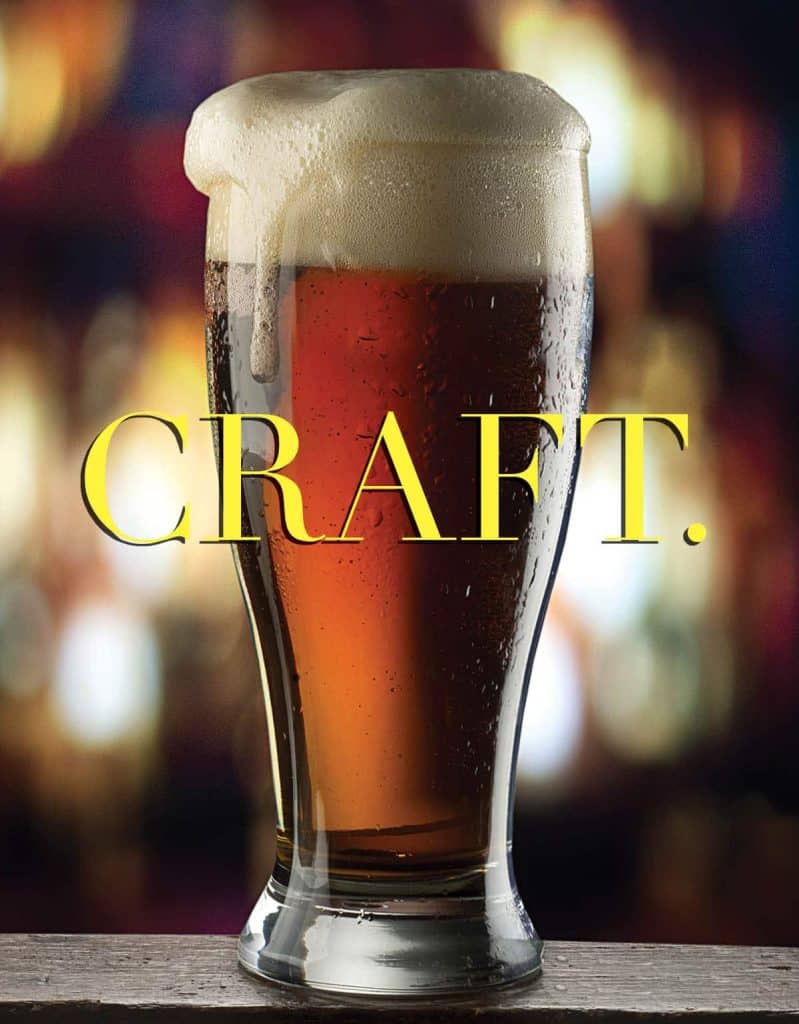 When I was much younger all I really knew about beer was that it wasn’t something you were supposed to enjoy. Wine, sure—I remember the swirling of the glasses and the uncorking and hearing about how these really old “vintage” wines were supposed to be so spectacular and all the ladies gathering around the table with whites and reds and crackers, but nobody ever said anything like that about beer.

Beer was the cans on the bottom shelf of my grandfather’s refrigerator that grandma looked at like a stain that wouldn’t come off, the featureless swill my uncle consumed roughly 12 at a time—depending on what holiday it was—the cold beverage that took up exclusive residence in the bizarre, back-from-the-future air conditioned stucco-lined tunnel at our town grocery store. My sister and I always felt like we were getting away with something when we’d traverse it, walls of malty inebriant stacked like a rogue’s gallery that needed to be hastily evaded as we blasted through.

My dad still chuckles when I bring up the story he used to tell about when he’d go into the local gas station as a young ne’er-do-well to pick up a six-pack and all it said on the plain white can in big black letters was BEER—no other messages needed here, this is BEER, it is for drinking, it is for you. Do you like beer? Well then. Here is BEER.

Things have changed a little bit since then.

“I think for a long time people just kind of resigned themselves to the fact that only a handful of companies in the U.S. made beer, and that was pretty much it,” says Kevin Carr, founder of Community Brewing Co., in Dallas. “But just like a lot of other industries where you now have local artisans, local foods, new experiences… we’re seeing a cultural shift toward things that are locally grown, locally created. The closer you are to where it’s brewed, the fresher and better it’s going to be.”

He’s not wrong. Examine any now burgeoning industry and you’ll find a homegrown competitor—artisan chocolate, soaps, candles, real-sugar sodas, slow-smoked barbecue, farm-to-table meals, and even the recent surge in the popularity of limited pressing vinyl records are all reflections of the wellspring of enthusiasm more and more people are having for small-batch, handmade goods that reflect their own locations and subcultures.

James Laudano, a history teacher from New York who has spent the last several months in his car touring National Parks all across the country (and stopping at dozens of local breweries and tap rooms along the way), echoes the sentiment. “Beer has certainly pushed itself into the fields of wine and coffee as a legitimate artisanal craft,” he writes me on his cellphone from Chasm Lake in Rocky Mountain National Park, at an elevation of 11,000 feet. “It’s been interesting to basically see that happen in real-time over the last five or ten years, and look at how it’s changed the perception of beer from sort of the drink dad has when he’s vegging out on the couch to something a little more socially respectable.”

One need look no further than one’s nearest gastropub—a sort of high-end version of your typical bar—to witness the enthusiasm that shop owners and bartenders now show for their product. Some bars, like the Dallas Beer Kitchen in the city’s Lower Greenville area, have offered special beer and chocolate pairing meals, while it’s no longer uncommon for a pub to offer tapping events where they get into a single keg of a special brew for the first time together. Order a “flight” of beer—composed of multiple smaller beers to taste with your friends—and you won’t get nearly as many weird looks from the people around you as you might have expected a few years back.

Limited, seasonal releases are also now the order of the day. Houston’s Saint Arnold Brewing Company has been releasing a Christmas Ale for years, which they recommend pairing with “fruit cake, Christmas pudding, and squash bisque,” and Community’s own Funnel Cake Ale—designed specifically for the Texas State Fair, and infused with (obviously?) pureed vanilla beans for that fairground flavor—was such a big hit in 2014 that it’s available canned on store shelves this time around. 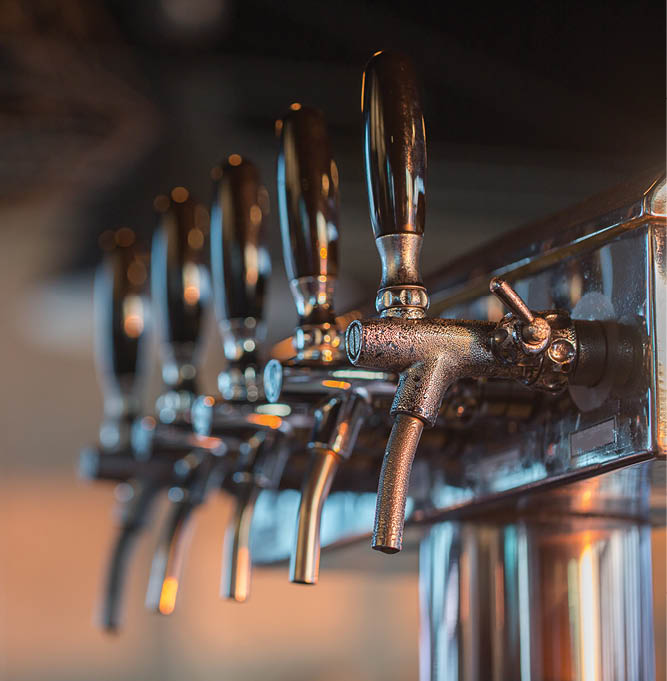 Many craft beer and kitchen joints offer at least a dozen taps dedicated to local brew, supermarket shelves have seen their “craft beer” sections expand from a couple of shelves to multiple coolers, and even movie theaters like Texas’ own Alamo Drafthouse boast anywhere from 30 to 50 taps, many of them filled with selections by Texas brewers that can run the gamut from places like Fort Worth’s Rahr and Sons to Blanco’s Real Ale to Dallas’ Lakewood Brewing Company to Austin’s Jester King.

With so many beers and breweries now trying to make a splash, differentiation and variety is key. Take, for instance, one of Arlington’s newest breweries, Legal Draft Beer Co., which has named all of their brews to fit the theme of law: Legal Blonde, Accused Amber, Hung Jury Hefeweizen, Presumed Innocent (an India Pale Ale), and—of course—the stout: Chief Justice. This time of year you may even stumble on a “Lawktoberfest.”

“At Community, we started with just three beers,” says Carr, “a pale ale, a Vienna lager, and our Public Ale, and then along the way we’ve continued to add. Right now, the trends are pretty strong on fruit based beer… it’s interesting in this climate how many beers are coming out and finding success. We always try to be careful in what we choose while also respecting the traditions of beer making.” 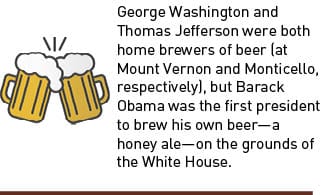 One thing is certain—the public can’t get enough craft beer. The non-profit Brewers Association, a trade organization dedicated to small and independent American brewers, reports that independent craft brewers now represent more than 12 percent of the market share of the entire beer industry, with a retail dollar value of $22.3 billion, 16 percent growth over the year before. In Texas alone, there are 189 craft breweries producing 35 million gallons of beer each year.

To put it simply, the future of beer, and craft beer particularly, seems bright and fizzy.

“I think in a way the growing fascination with craft beer stems from our increasing focus as a culture on specialization—and to a degree the rejection of the norms that have come before us,” says Laudano. “Beer has become a cultural touchpoint, something to talk about, to be interested in, a hobby, instead of something you just drink because it’s cold.”

Carr is equally optimistic. “My hope is that as customers become more and more sophisticated that quality will win the day—regardless of the brewery,” he says. “Knowledgeable beer drinkers are passionate beer drinkers, and they can tell a good beer when they drink one.”

With endless enthusiasm for all varieties, I am frequently reminded of a singular, apocryphal quote virtually every time I pick up a glass in perhaps the same way my father was with his BEER—whether it’s at the end of a hot stint in the sun, on a fall day raking leaves, or after the drive home from work on Friday afternoon: the best beer in the world is the one I have in my hand.