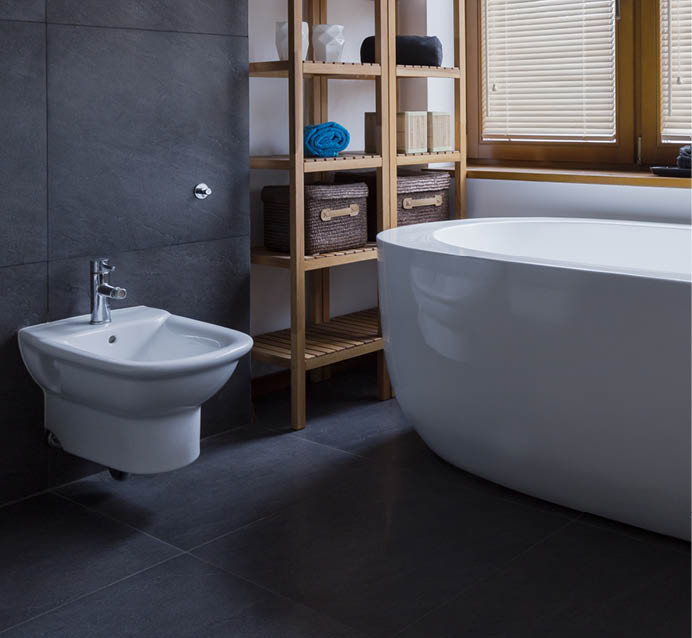 If you’re like most Americans, you probably have a nebulous concept of what a bidet is, perhaps from tales passed down like legends via friends or family, a scene in a movie or TV show, or maybe a bizarre anecdote shared around on social media.

For whatever reason, be it our stigma against discussing personal hygiene or merely a fanatical love of toilet paper, the bidet in America is more often regarded as a weird device from distant shores than what it actually is—the most hygienic and eco-conscious way to keep yourself feeling clean and refreshed after you’ve done what my grandmother used to call Taking Care of Business. Yes, the bidet (pronounced bih-day), to cease mincing words, essentially sprays your underparts with a stream of water originating from the depths below.

The cons are few, and the pros many—according to National Geographic, nearly 27,000 trees worth of toilet paper are sent to the landfill or sewer every single day, the equivalent of tens of millions of rolls. Once you consider the amount of fuel consumed, water used, and emissions released during toilet paper production, you can start to get a better picture of how regular bidet use can reduce your carbon footprint and help the environment.

But perhaps more important to many Americans are the health benefits granted to regular bidet users. It stands to reason that moreso than scratchy toilet paper, water is a better cleanser when dealing with easily exacerbated skin conditions like hemorrhoids, irritable bowel syndrome, and other afflictions, and can also help to prevent UTIs as well as bathroom bacteria often transported on hands. If you’re already dealing with a mobility condition that makes it physically difficult to wipe with toilet paper—such as severe arthritis, surgery to resolve an arm or shoulder injury, or tremors—using a bidet can also be far easier.

Though they originated as standalone fixtures akin to chair-level sinks, most modern bidets are attached to the toilet themselves, sandwiched between the bowl and the seat. Operation can be as simple as a toilet-side dial to adjust water flow or as complex as an array of buttons that might have you feeling something like Captain Kirk on the bridge of the U.S.S. Enterprise while you adjust the stream’s position, aim, pressure, and temperature (some of the most high-end Japanese models even include integrated LED night lights, automatic lids, and built-in air fresheners).

Ultimately, whether you want to spend $40 or $400, there’s a bidet out there for you. And most of them are easy enough to install at home by yourself (though for more complex ones that add electrical features like heated seats or warm water, you might want to seek some professional assistance).

Don’t be shy! After a while you might even end up enjoying your new lifestyle enhancement so much you try to convince other people to cast aside their trepidation and give it a shot. Not that I know anyone like that.