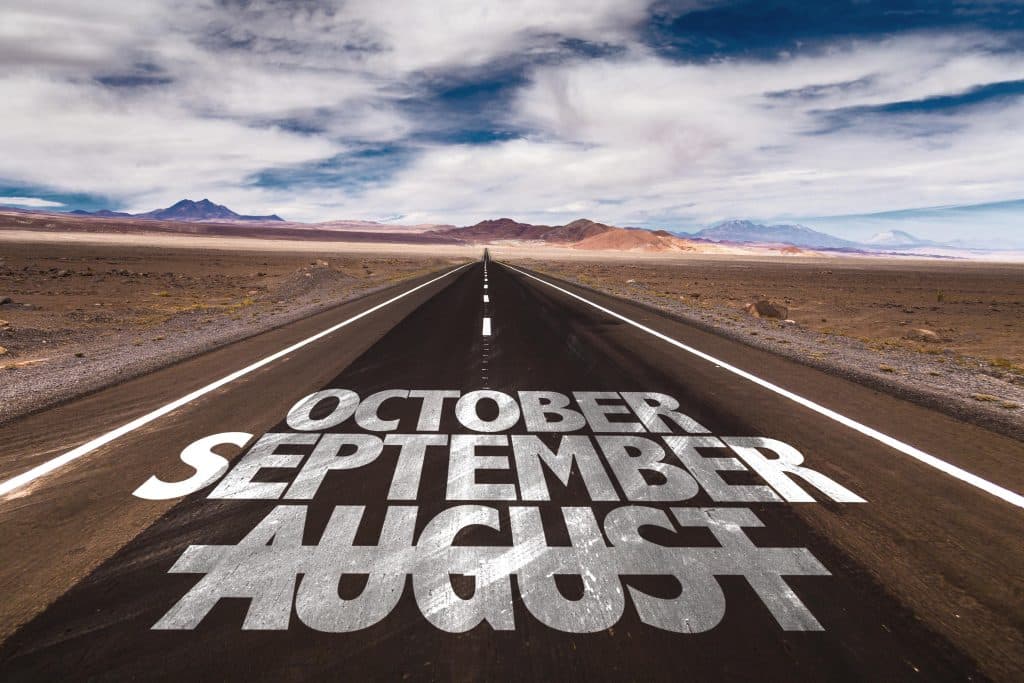 In the original Roman calendar, September was the seventh month; the name was derived from the Latin word septem which means seven. In Biblical numerology, seven is the number of perfection, and is often referred to as “God’s number.” No doubt, the month of September has spiritual implications (as does everything in our natural world).

A simple Google search reveals September has proven to be a significant month not only in American history, but throughout the world. September 11, 2001 is indelibly imprinted on our hearts and minds as one of the worst days in American history. In that same month and year, the stock market crashed, and it crashed again in September of 2008. Some predict it will crash again this September, and perhaps as you read it already has.

Regardless of what September may or may not bring, it is imperative our eternal focus stay constant. In the midst of change and uncertainty, emotion can spin out of control leaving us in a haze of fear and confusion. As we approach the coming months, let us be strong in the Lord and remember the following foundational truths:

1) You only have authority over a storm you can sleep in. I borrowed this statement from Bill Johnson because it is a poignant observation wrapped in a simple, easy to remember sentence. You know the story in Matthew 8: the disciples and Jesus set sail on a boat together and a ferocious storm kicks up on the sea. The disciples are terrified and seek help from Jesus only to find Him sleeping. They are incensed and accuse Him of not caring whether they die. Jesus rouses and immediately calms the storm, but He seems surprised by the disciples’ lack of faith. You see, Jesus knew His destiny was Calvary—not death in a storm at sea. He knew who He was and whose He was, so He slept in peace. The lesson remains for us today. Do you know who you are and whose you are and the destiny He has stretched out before you? If so, rest in peace knowing you have authority even in the midst of the storm.

2) Fear is an open door. With musical children in my home, I’ve heard the score from the movie Frozen, more times than I can remember. Honestly, I’d be grateful to never hear the words and music again! One of the songs is “Love is an Open Door.” Yes, love is an open door, but so is fear, and sadly most open the latter door more often than the former. Our gaze is frequently drawn to evil, rather than set on the conquering King. The enemy has power, but he needs authority. He craves authority and finds it in our fear; fear gives him what he needs to wreak havoc in our lives. The Bible tells us over 300 times not to be afraid. God realizes fear is a natural response to turbulence, and His solution is simple. He tells us to look to Him, to look up to the mountains to find our help (Psalm 121:1). The only fear that belongs in us is the fear of the Lord. If we are consumed by fear of Him, there will be no room for fear of anything or anyone else. If we welcome any other kind of fear, we open the door to the enemy, inviting him to establish a foothold in our lives.

3) God is the same yesterday, today, and forever. Though your world may look drastically different than it did yesterday, God is always the same and He is never taken by surprise. He sees everything from end to beginning, and reminds us He has already overcome the world. Great comfort can be found in Psalm 46:1-3: “God is our refuge and strength, a very present help in trouble. Therefore we will not fear, even though the earth be removed, and though the mountains be carried into the midst of the sea; though its waters roar and be troubled, though the mountains shake with its swelling.”

4) Christians were promised trials and persecution. The American Church is notorious for the prosperity message, and has often been criticized due to its overemphasis. Obviously, God wants us to prosper—His Word tells us so. However, blessing and prosperity is only one side of the equation. I Peter 4:12-16 says:

Beloved, do not think it strange concerning the fiery trial which is to try you, as though some strange thing happened to you; but rejoice to the extent that you partake of Christ’s sufferings, that when His glory is revealed, you may also be glad with exceeding joy. If you are reproached for the name of Christ, blessed are you, for the Spirit of glory and of God rests upon you. On their part He is blasphemed, but on your part He is glorified. But let none of you suffer as a murderer, a thief, an evildoer, or as a busybody in other people’s matters. Yet if anyone suffers as a Christian, let him not be ashamed, but let him glorify God in this matter.

The Word tells us to rejoice, so let us not despair in difficult trials, but instead embrace the fullness of the gospel.

5) Desperation brings consecration. I have often wondered if it is possible to be desperate for God when surrounded by comfort and abundance. Jesus said it was almost impossible for a rich man to enter the Kingdom. Perhaps His assertion is based on Ecclesiastes 10:19 which says, “money answers all things.” Therefore those with resources are less likely to seek the hand, and more importantly, the heart of God. You may be thinking you’re not rich, but lest you move on unaffected, consider those making an annual income of $34,000 are wealthier than 99% of the inhabitants of the world! The priorities of American culture clearly imply a people spoiled by riches. We need to be awakened from our apathy and complacency to search for the face of God. When our circumstances change, we are more likely to cry out to God in desperation and a fresh consecration to find Him and walk in His ways.

Change will come and some of it will be challenging and perhaps even heart-breaking. We must hold fast to the confession of our faith and keep our eyes locked on the eternal reward. Remember, “the path of the [uncompromisingly] just and righteous is like the light of dawn, that shines more and more (brighter and clearer) until [it reaches its full strength and glory in] the perfect day [to be prepared]” (Proverbs 4:18, AMP). The end is glorious for the righteous, so if it isn’t glorious it isn’t the end!