Kevin Weable, who is with Go.Be.Hope, an organization that actively seeks orphanages to help, told me a story that happened during an expedition to Haiti. Kevin and a group of men had traveled to Haiti to discover where they could partner in orphan care. The trip involved visiting a few different orphanages. The first orphanage was highly organized. Kevin explained there was a big set up for teams to come in, which included a comfortable guesthouse. The orphanage had cooks on staff; it was self-sustaining with a rabbit farm and a garden. “They really had their stuff together,” said Kevin.

The second orphanage was the complete opposite. Most of the children were special needs. Children in wheelchairs were set up against a wall and rarely tended to. The team slept on the floor of a very hot room. Yet somehow, in the midst of the most deplorable conditions, Kevin describes how God met them there. 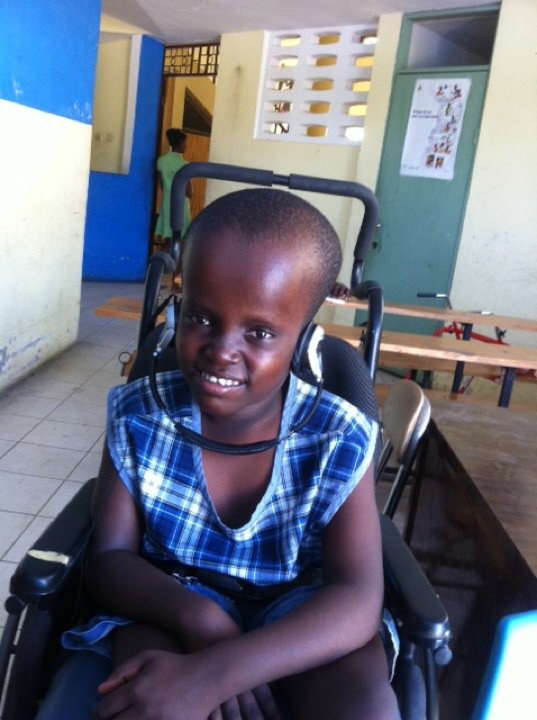 “There was this one kid, they called him Michael Jackson, he just sat in his wheelchair. But you kinda had the feeling he understood you,” Kevin said.

Michael had hydrocephalus, a medical condition in which there is an abnormal accumulation of cerebrospinal fluid in the brain. It’s highly treatable in the U.S. but few doctors are trained in underdeveloped countries. The fluid causes increased pressure inside the skull and may cause progressive enlargement of the head if it occurs in childhood, convulsion, tunnel vision, and mental disability. While Michael could not speak, he would sometimes nod and make grunting noises.

One man on the team named Charlie brought his iPod with headphones. The director of the orphanage told him Michael loved music. So Charlie sat down next to Michael and gently placed the headphones around his enlarged head. For the next 2 hours Charlie sat with Michael. And Michael lit up as he listened to Charlie’s playlist.

Kevin can never share what happened next without breaking up. It’s something he’ll never forget. “Towards the end, ‘Give Me Jesus’ by Jeremy Camp came on and Michael started singing,” said Kevin. This non-verbal kid who never heard the song before, by the Spirit began singing ‘Give Me Jesus’. The team of men could only listen and cry.

Did you know there’s a God-song? It reminds me of what happened to Michael; we couldn’t possibly know the words on our own.

Psalm 40 says: I waited patiently for the Lord to help me, and he turned to me and heard my cry. He lifted me out of the pit of despair, out of the mud and the mire. He set my feet on solid ground and steadied me as I walked along.

He has given me a new song to sing, a hymn of praise to our God. Many will see what he has done and be amazed. They will put their trust in the Lord.

U2 performs the song ‘40’ at the end of many of their concerts. Beginning with Bono, band members walk off the stage one by one leaving the audience singing the last refrain long after they’re gone.

While there’s nothing new under the sun, there are seasons of a new song in God as He takes us from faith to faith and glory to glory. Psalm 40 is an example of faith persevering through trial. Breakthrough comes with a new song. This world is in need of a new song, a God-song. I believe the song God is giving His people is pure and authentic, echoing the heart of the Father. It’s a song of mercy, grace and compassion for the hurting. A song of hope, and redemption. A love song

A God-song changes the atmosphere. For too long we’ve lived in fear, reacting to the darkness instead of setting an atmosphere that shines a light.

A God-song, a new song, tears down walls constructed by men, old mindsets, religious structures that keep us stuck. Music is transcendent; it’s universal. It’s amazing how some will not darken the door to worship in different churches because of doctrinal issues, yet many of us are singing the same songs. Often times we’re threatened by our differences. But when a God-song plays, our differences come together in a spirit of harmony that makes us one. When we’re singing God’s song, choirs of angels are joining in!

Old songs are great for remembering the good old days, but we can’t live, really live in the past. New songs can take us to places we’ve never been. The former glory will be nothing compared to the latter.

This is what God says,

the God who builds a road right through the ocean,

who carves a path through pounding waves,

The God who summons horses and chariots and armies—

they lie down and then can’t get up;

Be alert, be present. I’m about to do something brand-new.

It’s bursting out! Don’t you see it?

There it is! I’m making a road through the desert,

rivers in the badlands.

Wild animals will say ‘Thank you!’

—the coyotes and the buzzards—

Because I provided water in the desert,

rivers through the sun-baked earth,

Drinking water for the people I chose,

the people I made especially for myself,

On a personal note, your song is unique. You sing a song no one else can sing. He smiles when He hears you, because you are His favorite song.

Still, all of creation sings! It testifies to God’s love. The trees and the rivers clap their hands, the mountains and hills burst into song. “How long to sing this song?” Look up! Awaken our soul to sing. Winter is over. Flowers appear on the earth; the season of singing has come, the cooing of doves is heard in our land.

Connect with Michelle at HandOfTheKing.com

To learn more about orphan care around the world visit GOBEHOPE.com